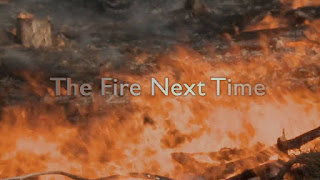 It’s the Second Sunday of Advent. The Christmas decorations are up and the shopping has begun.  So we’re supposed to be feeling pretty good right about now. But here are these words from John the Baptist:  “You brood of vipers!”

Who does he think he is, talking to us like that? We’re in the midst of the holiday season, and he wants to start calling us snakes?  What’s going on here?

We had a prayer in seminary:
Lord, when we are shaken up, comfort us.
And when we are comfortable, shake us up.
So hold on -- we are about to be shaken up. 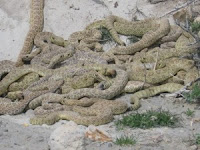 This scene takes place on the Jordan River where people are coming to this strange prophet to be baptized. These are ordinary people like you and me – office workers and bankers, people who work for the government, people who’ve served in the military.  Both men and women, teachers, parents, builders, lawyers and healers.   And just like us, they are basically good people. These are not hardened criminals. So why is John calling them a brood of vipers?
John didn’t know Martin Luther, but he probably would have agreed with a Latin phrase that Luther used to describe people like us: simul justus et peccatore.  It means, at the same time saved and sinner, simultaneously justified and condemned, healed and broken. It’s the paradox of the human condition. We are at once loved and embraced by the grace of God, yet we hurt each other and damage our world, both individually and as a global human system.

So when John describes us as a brood of vipers, we know there is some truth to what he is saying.  But he gets even more provocative when describing the One who is coming: “I baptize you with water. But one who is more powerful than I is coming.  It would be a big deal for me just to tie his shoelaces. You have no idea what you’re in for. He will baptize you with the Holy Spirit and fire.  His winnowing fork is in his hand, to clear his threshing floor and to gather the wheat into his granary; but the chaff he will burn with unquenchable fire.”

Winnowing fork? Chaff? Unquenchable fire?  What can all of this mean?

In 1963 author James Baldwin wrote a book entitled The Fire Next Time which takes its title from a line in the spiritual “Mary Don’t You Weep.”  Baldwin’s book consists of two personal and poignant letters written on the occasion of the centennial of the Emancipation Proclamation.  His words exhorting Americans – both black and white – to confront the terrible legacy of racism were an intellectual rallying cry for the Civil Rights Movement.  But reading them now, over four decades later, in light of recent events following the presidential election, his words have just as much, if not more potency.  Because in many ways it feels as if a fire has burned across the political, cultural and social landscape of this country.  But this is not a holy fire.  It is the fire of white supremacy, racial and religious hatred, androcentrism, and eco-cidal domination.

I’m thinking of a video of White Supremacist Richard Spencer speaking openly about the supposed superiority of whites and his intention to return America to white people (as if it ever actually belonged to them).  I’m thinking about the hundreds of reported incidents of racial and religious hatred displayed throughout the country over the past three weeks.  I’m thinking of a teacher friend of mine telling about a white elementary school student telling their dark-skinned classmate, “Now that Donald Trump is president, he’s going to send your parents away and you’ll have to live here all by yourself.”

Baldwin’s words in 1963 echo loudly today:  "[Whites] are still trapped in a history that they do not understand, and until they understand it, they cannot be released from it.  They have had to believe for many years and for innumerable reasons that black men are inferior to white men."

I receive these words as a white, female Christian preacher and teacher of preachers, a woman who has benefited from the privilege of my race, my education, and my religion.  From this standpoint, it is becoming increasingly clear to me that what has happened since the election is a burning away of the chaff that barely covered the brood of vipers lying beneath.  As the saying goes, “We have met the enemy, and he is us.”

It is a truth that people of color have known for years, for decades, for centuries.  But this truth comes as a punch in the gut to those of us who existed in the comfort of our privilege.  The thin veil of decency has been burned away to reveal the truth about who we are as a nation.  The ugly, dangerous, venomous truth has come to light and shown us in no uncertain terms that we are in need of serious repentance – metanoia (Matthew 3:2).

After the election I was feeling particularly despondent thinking of the ways in which so much of the tenuous progress we have so carefully built in terms of interfaith relations, race relations, environmental protections, equal rights for women and the LGBTQI community could be rolled back in the coming years.  A friend said to me, “It’s like an arson came in the night and just burned down the house.”  I agreed.  That’s what it feels like.

But as I’ve sat with this image for the past couple weeks, and contemplated these last few days the image of the holy fire, I’ve realized that there are other images at work here.  For example, controlled fires can be used to stop wildfires by carefully burning a strip of land and depriving the wildfire of fuel.

And natural fires that occur in the forest not only allow the saplings to see the light, but also release seeds that need the heat from the fire in order to grow.

With these two images in mind, I make the case that as preachers, indeed, as Christians, our task now is to do two things:

1) We need the “controlled burn” of Jesus’ prophetic fire to deprive the wildfires of evil of their fuel.
2) We need to point to the new growth of saplings and seeds that are sprouting up from the ashes. 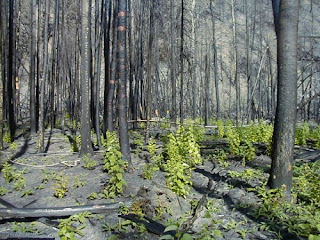 The controlled burn of prophetic speech means speaking boldly in our pulpits and pews against racial hatred, Islamophobia, misogyny, anti-Semitism, and all the “isms” that are rearing their fanged heads with impunity.  It means taking bold actions as churches to divest from fossil fuels in order to deprive the wildfires of runaway climate change of the fuels that are consuming us, even as we consume. Holy fire can fight unholy fire.

Of course, as John warned us, this will not be a comfortable process. We will experience pain, we will come to know deep sorrow, and we will come in contact with that sinful part of our own nature and the sinful nature of others. But that discomfort will be a sign that the holy fire is burning away the chaff.

As proclaimers of the gospel, we also need to ask: Where is God creating new growth?  What are the seeds of hope that need to be nurtured, even as we are still mourning in the ashes?  We need to point to that new growth and lift up stories of resistance and renewal.
Regarding our planet, I’m thinking of the growing numbers of cities and countries that are pledging to move to 100% renewable energy in the coming years – new growth, even in the midst of ashes.

Regarding racial hatred, I’m thinking of the growing number of safety pins seen on the clothes of those who want to signal that they are a safe person, even in the midst of raging fires.

Regarding Islamophobia, I’m thinking of the man in Texas man holding sign in front of mosque: "You belong. Stay strong. Be blessed. We are one America." 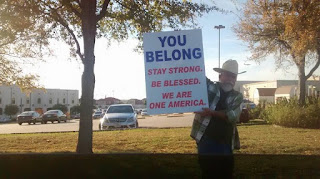 The man’s name is Justin Normand, a 53-year-old man who owns a sign shop in Dallas. "This was about binding up the wounded. About showing compassion and empathy for the hurting and fearful among us," Normand wrote in his Facebook post. "Or, in some Christian traditions, this was about washing my brother's feet. This was about my religion, not theirs."

That is a controlled burn.  And it shows that new growth and new hope is springing up in places we would least expect to find it.

This is what we need to be watching for during this Advent season – new growth after the controlled burn. So be on the lookout for that holy fire.

It starts with only a small spark . . . in a manger full of dry hay.

The Rev. Dr. Leah Schade is the Assistant Professor of Preaching and Worship at Lexington Theological Seminary (KY) and an ordained Lutheran minister (ELCA), though the views expressed in this post are her own and do not necessarily reflect the institutions she serves.  She is the author of the book Creation Crisis Preaching: Ecology, Theology and the Pulpit (Chalice Press, 2015).