Do Not Sacrifice Our Children on the Altar of the Gun

Do Not Sacrifice Our Children on the Altar of the Gun
by The Rev. Leah Schade
Read:  Genesis 22:1-14:  “The Sparing of Isaac”
[This is a departure from my usual topic of ecology and theology.  But I have been so distraught over the killing of 20 children and 6 adults by shooter Adam Lanza at Sandy Hook Elementary School in Newtown, Connecticut on December 13, 2012, I am compelled to write about this.] 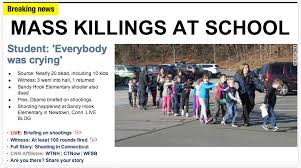 There is no greater cliff-hanger than the image of Abraham’s knife poised above Isaac, just as an angel flies down to stay his hand.  But it is also one of the more disturbing stories in Genesis because of the questions it raises.  Why would God test Abraham by telling him to sacrifice his own son?  What kind of God is this?  Why would God do such a thing?  And why would Abraham so willingly follow this command to kill his own son without questioning?

The command to kill the boy Isaac seems downright cruel.  Why would God issue such a violent and abhorant edict?  Well, in that day and age, child sacrifice was not unheard of.  It was not unusual for the peoples and cultures of that time to sacrifice their own children in order to appease an angry god, or to stay on the good side of capricious deities.  While it must have broken Abraham’s heart to hear his God make such a demand, he knew from the cultures and religions around him that sometimes this is the price that must be paid in order to secure the favor of the deity.

This story needs to be retold again and again. Because it raises questions for our modern society.  Might we, in some ways, be like Abraham, blindly assuming that certain sacrifices are necessary, without questioning the culture around us that has conditioned our behaviors?  We might think that we’ve moved beyond these barbaric practices of child-sacrifice in today’s modern world.  But truth be told, children are sacrificed daily on the altar of the gun.

Guns are god-like in this country and we worship them.  Worship may be defined as anything to which human beings devote their sacrifice, allegiance, finances, time and heart.  Thus, the gun is an almighty god that is bowed down to in the United States.  The gun has become so ubiquitous, it assumes god-like omnipresence.  Guns permeate our television shows, movies, video games and toy store aisles.  Gun shows are like old-fashioned church tent-revivals touting a religion that will “save” its adherents.  The gun industry is a billion-dollar machine that spreads a gospel of salvation, profiting mightily by convincing the public to own as many guns as they do Bibles, if not more. The NRA is the royal priesthood to which all politicians must defer and pledge their allegiance.  The Second Amendment to the Constitution, “the right to bear arms,” has been twisted to become its dogma that demands sacrifice.

Martin Luther encouraged people to “call a thing what it is.”  So from a theological standpoint, I am taking the mask off the gun to reveal it for what it truly is:  evil.  And I say this as a former hunter who used to faithfully go into the woods every fall and spring to kill animals with a shotgun or rifle.  I do not begrudge hunters this right.  But as a parent, and as a citizen who has watched one too many sacrifices of our children at the altar of the gun, I have had enough.

I don’t have the political clout to take on the NRA priesthood or the politicians beholden to the organization’s campaign donations.  I don’t have the cultural clout or societal standing to organize mass protests and topple the idol of the gun.  All I have is my writing, my broken heart, my anger, and Internet access.  And prayer.  My nine-year-old daughter wrapped her arms around me last night and reminded me that the most important thing I can do is pray.  And as I spent the night in a restless mix of prayer and nightmare, I awoke convinced that I needed to speak out on this issue about guns from a theological and biblical perspective.

Like Abraham trudging up the hill to Mt. Moriah, we have been fooled by the gun-religion and culture around us into believing that the only way to appease the angry and demanding gun-god is by accepting that our children must be sacrificed.  We unquestioningly believe in the ritual practice of manufacturing more and more guns and giving unfettered access to all who would devote their money and their heart to the gun.  To question the doctrine of the NRA is to be accused of heresy in the form of being “unpatriotic.”  But, in fact, the more guns we produce and sell, the more people who have them, the more people – children – are dying from guns.

This gun-god cares nothing about our children, and convinces us to justify this lack of care by the bogus mantra: “Guns don’t kill people; people kill people.”  Let’s be very clear:  GUNS KILL PEOPLE!  I have held a gun.  I have fired it.  As a hunter I have used it to kill, to take the life of another being.  There is something about the gun that imbues the holder with a sense of power over another – the power to give and take life.  If I do not pull the trigger, I have spared your life.  If I pull it, I take your life instantly.  This is god-like power.  It may be argued that any weapon can give that sense of power.  But let’s face it – none of the mass killings that have happened in our country were committed with swords, knives or cross bows.  It was guns, plain and simple.  Guns kill people.

In the Genesis story, Abraham and Isaac begin their final walk to the site of sacrifice.  Isaac’s mind must have been racing, the weight of the wood on his shoulders nothing compared to the weight in the pit of his stomach.   Finally he asks, “You know, Dad, I was just thinking.  We’ve got the fire; we’ve got the wood . . . where is the lamb?” It’s a question that must have gone through the heart of Abraham like a bullet.  It’s one of the most dramatic moments of irony in the Genesis story.  Abraham’s answer seems evasive, but it also reveals his faith:  “God himself will provide the lamb for a burnt offering, my son.”  YHWH yir’eh – in Hebrew:  God will provide.

When my five-year-old son heard the news that children in an elementary school just like his were killed, he asked a similar question:  Is a bad man going to come to my school and shoot kids?  In other words, am I next?  Am I the lamb to be sacrificed?  I could only say to him words similar to Abraham’s, “I hope and pray that God will provide and save you and your classmates from this fate.”

“YHWH yir’eh, God will provide.” I would imagine that those were the words Abraham kept repeating to himself over and over as he piled up the stones for the altar, as he lay down the wood for the sacrifice.  Perhaps even Isaac began repeating the words like a mantra as his father bound his hands and he allowed himself to be laid upon the altar.  “YHWH yir’eh, God will provide.”

With tears in his eyes, Abraham grabs the dagger.  He stands over his son, his tears dripping onto Isaac’s face, mingling with the tears of his beloved son.  And he raises his dagger.  One last time, “YHWH yir’eh, God will provide. . .”

“Abraham -- STOP!  Do not hurt the boy.  I know that you trust me.  I know that you would do whatever your God asks of you -- even if it meant killing your own son.  But let this be a sign unto you -- I do not require child sacrifice.  God does not demand the blood of children.”

Sometimes we have to be taken right to the edge of death to realize the truth about God.  In this story, we are taken right to the edge of the knife so that the lesson of this story will be indelibly etched in our minds.  Do not sacrifice your children.  Do not engage in deadly violence against your offspring.  Not now, not for all time.  Our God – the true God – is not one who demands us to put our children on the altars of idols and sacrifice them.  This is a God who seeks the preservation of our offspring.   The books of Exodus and Deuteronomy have explicit laws against child sacrifice.  Deuteronomy 18:10:  “No one shall be found among you who makes a son or daughter pass through fire.”

But we have allowed ourselves to become convinced that the sacrifice of children is simply the price that must be paid to the gun-god.  The gun-god is the only one who will provide.  The gun is the answer to all our woes.  Is the teenager’s music too loud?  Shoot him.  Is his wearing of a hoodie making you feel threatened?  Shoot him.  Are you angry at the politician?  The ones who have mistreated you?  The world?  Angry at God?  The answer is the gun, always the gun.  It is the final solution.

It is past time for pastors, theologians, and people of faith to take a united stand against this idolatry of the gun, tear down the idol and the altar, and protect our children.  I can only pray, sobbing, my tears dripping onto the heads of my children who may be next . . . “YHWH yir’eh, God will provide.”