Sermon: The Thousandth Generation Starts with You

See if you can figure out what these three scenarios have in common:

1. I read recently in the news that Exxon Mobile Corporation – the global conglomerate of the fossil fuel business – knew about the dangers of climate disruption from fossil fuels almost 40 years ago.  According to Scientific American (http://www.scientificamerican.com/article/exxon-knew-about-climate-change-almost-40-years-ago/), a new investigation shows the oil company understood the science of climate change before it became a public issue and spent millions to promote misinformation to protect their profits. Now here we are, two generations later, and we are dealing with the consequences of that cover-up as our world is inundated by warming temperatures, drought, disappearing island nations, mass extinctions, and ocean acidification. #climatechange

2. I talked with a man recently who shared with me the saga of a family that chose to adopt a child who was born with drugs in his system as a fetus.  The child’s mother had been warned about the dangers of doing drugs.  But she had turned to illegal drugs after suffering from an injury that left her with ongoing pain.  Now here we are, two generations later, and the child has grown into a man who has had run-ins with the law, been in prison, and has himself fathered a child who he never sees.  That child is dealing with the consequences of decisions made forty years ago by people she’s never even met. (And deaths from drug overdose are the leading health epidemic in Pennsylvania.)

3. On Thursday I watched a webcast hosted by the bishop of the ELCA, Elizabeth Eaton, talking with African American Lutherans who are dealing with the effects of racism in society, in the criminal justice system, and in the church.  Do you know when the first slaves were kidnapped from Africa and brought by the Dutch to America?  The year was 1619 – nearly four hundred years ago.  And here we are, twenty generations later dealing with the consequences of the decision to steal human life and trade it like animal chattel. #racism #blacklivesmatter

What do these three seemingly unrelated stories have in common?  Moses would know:  consequences!  He watched his people create an idol out of wealth, desecrate the name of God, and break just about every commandment God had inscribed on those two stone tablets he had brought down the mountain.  His own brother even betrayed the faith in a moment of weakness.  And as a consequence of their sin, the Israelites will spend the next forty years wandering in the desert when they could have been enjoying the milk and honey of the Promised Land.  And the real kicker is that the children born to that generation will have had no part in the sin committed by their parents.  But they will have to deal with the effects, as will their own children, and their grandchildren.

Maybe you know that feeling of frustration – being trapped by the decisions your parents made when you were a child or even before you were born, your destiny seemingly predetermined by their lack of foresight, their selfishness, or their ignorance.  When that happens, we might have the same concerns as Moses – God are you really with me?  Have I really found favor in your sight?  If so, why am I having to deal with this mess that is not my fault?

I love God’s response:  “My presence will go with you, and I will give you rest,” (Exodus 33:14).  God promises Moses that she will put Moses in a cleft in the rock, put her hand on him as she passes by, and let Moses hear the divine name:  I am who I am.  The same name that Moses heard at the burning bush so long ago which gave the assurance that God had heard the cries of the Israelite slaves in Egypt (incidentally, another example of 400 years of slavery as a result of decisions that were not their fault).  God promised then and God promises now that he will not abandon them, even though there are consequences that have to be dealt with.

So God puts Moses in that protected place between the high walls of the mountain peak, and just as God’s hand lifts, Moses catches a glimpse of the Divine presence passing – just the back side before passing out of sight.  And God declares his name: ‘The Lord, the Lord, a God merciful and gracious, slow to anger, and abounding in steadfast love and faithfulness, 7keeping steadfast love for the thousandth generation, forgiving iniquity and transgression and sin, yet by no means clearing the guilty, but visiting the iniquity of the parents upon the children and the children’s children, to the third and the fourth generation.’

There it is – the warning from God.  The consequences of sin will have negative effects rippling out 20, 40 years and longer.  It reminds me of something a recovering drug addict once told me:  When you use drugs today, it takes a little bit of happiness out of tomorrow.  In other words, whatever pleasure you’re getting right now from your sin will rob your future of joy, and the future of consequent generations.

That’s what we’re seeing with climate change.  That’s what the child of drug-addicted parents discovers.  That’s what our country is realizing even 20 generations after the prosperity brought about the brutal enslaved labor of Africans and the consequent decades of Jim Crow laws, and the current rising tide of racism and the racist structures of our society.

It can be tempting, then, to feel hopeless about your future.  Sometimes it seems as if our only option is to give up in frustration.  What’s the point in doing anything if everything has been predetermined, if the course has already been laid in and the ship’s already headed for the iceberg? Why even try to fix things when so many factors are working against us?  And why is God punishing us for something we had no part in creating?

It’s true that there are consequences to our decisions and our actions.  But it’s not necessarily that God is intending to punish the children for their parents’ sins.  It’s simply a logical follow-through for what happens when certain attitudes are in place, when certain words are spoken, certain actions are taken, and a pattern of habits and behaviors become embedded over time.

But here’s the thing that people often forget – there’s another part of this verse:  “The Lord, a God merciful and gracious, slow to anger, and abounding in steadfast love and faithfulness, keeping steadfast love for the thousandth generation, forgiving iniquity and transgression and sin,” (Exodus 34:6-7).

So yes, there will be ripple effects out to the children, and the grandchildren and even great grandchildren.  But what’s three or four in the face of a thousand generations of forgiveness and steadfast love?  In other words, there is reason to hope and not give up.  There is reason to look at your own life and your own generation and say:  God’s forgiveness starts here.  With me. 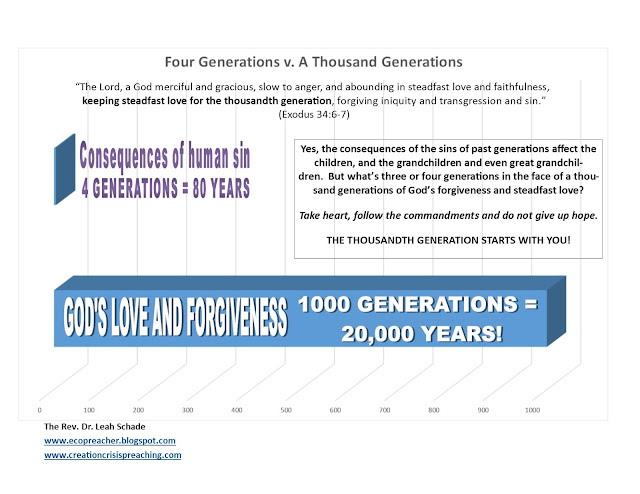 Whatever mistakes my parents made, whatever they did to me, whatever previous generations did to land us in this situation, let’s keep the long view in mind.  The tablets with the commandments still stand.  The covenant God made with Moses is the same covenant God made with Joseph, and Israel before him, and Isaac before him, and Abraham before him. A thousand generations is a long time!

How long is a generation?  Depending on the source, it’s anywhere from 20 – 30 years.  That means God’s love is good for 20,000 – 30,000 years!  And that’s not just from Moses’ time.  That love is renewed whenever the commandments are upheld, whenever someone makes a new start, whenever a person makes a decision for peace, whenever someone takes action to be healthier, and preserve this planet for the next generation.  That’s why Jesus has no problem reminding people to hold the commandments sacred: “Whoever keeps the commandments and teaches others to do the same will be called great in the kingdom of heaven,” (Matthew 5:19).   Whenever that happens, we can bank on God’s steadfast love for the next 20,000 years!

No matter what challenges you are facing, keep listening for that voice of God.  And tell others to do the same.  When you hear others bemoaning the mess they’re in or giving in to despair about the future, remind them:  God knows your name and is giving you a moment of clarity in a protected space so you can see a way forward. Like we’ll sing in that old familiar hymn, "Rock of Ages":

So if you are feeling frustrated by the state of our planet – take heart and nestle into the “rock of ages, cleft for you.”  Hear God promising that, yes, you have to live on a new planet that is not entirely your fault.  But do the work of following the commandments and honoring the planet I have created and teaching others to do the same.  And my presence will go with you and I will give you rest.

If you are feeling trapped by sins of your parents, caught in a nasty web of dysfunctionalism, addiction, mental health issues, or long-simmering family conflicts that go back generations – take heart and take refuge in the rock of ages.  Hear God promising that, yes, you have to do the hard work of going to counseling or family therapy, and keeping your life on the straight and narrow in order to make up for the sins handed down to you from your elders.  But do the work of following the commandments and honoring your father and your mother – even if they don’t deserve it – and teaching others to do the same.  And my presence will go with you and I will give you rest.

If you are feeling overwhelmed by the seemingly intractable challenges of systemic racism – peak out from that space in the rock of ages and see the hem of God’s cloak passing by.  White folks:  follow the commandment against bearing false witness against your neighbor.  This means that we need to refrain from perpetuating racial stereotypes, telling racist jokes, or posting xenophobic memes on your Facebook page.  Do the hard work of engaging in racism awareness training, educate yourself on the realities of white privilege, and be assured that God’s presence will be with you and you will receive rest.

The double cure is already working on the past and the future.  So live in this present moment, right now, doing the right thing, having the right attitude, saying the compassionate words, taking the route of justice and peace, letting God work on you and through you to cleanse your hearts, minds and actions. The thousandth generation starts with you. 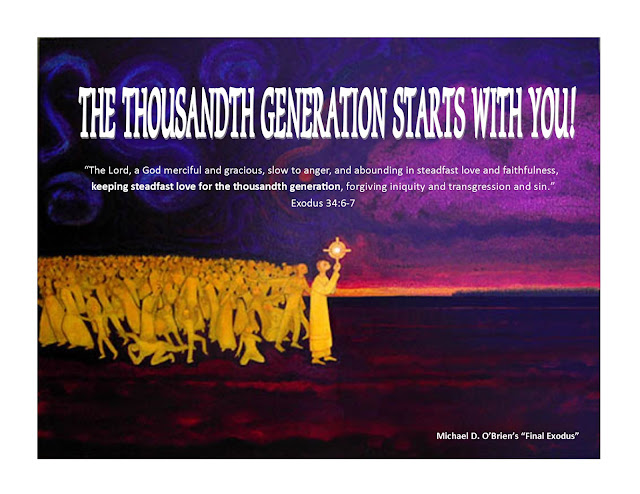