View the video of this sermon here:  https://www.youtube.com/watch?v=D-PgLhyaIr4&feature=share

I promised that I would reveal the commandment that is most difficult for me to keep.  For me, it’s #3 – honoring the Sabbath.  It is very difficult for me to take an entire day off to rest and focus on my relationship with God and the people I love.  Even if I say I’m taking a day off, I find ways to fill it with work – preparing for a class, grading papers, writing a sermon, working on a newsletter article.  Just checking my phone for texts and emails eats away at my time for walking, prayer, meditation, and spending time with my family.

You could say that, in a sense, work is my “golden calf.”  Now what do I mean by that?  Remember that the golden calf was the image Aaron made out of the gold from the Israelites that they carried out of Egypt with them.  On the night of the Passover, they asked the Egyptians for their jewelry, and it was freely given to them for their journey – after all those plagues, they just wanted the Israelites out of their land.

After crossing over the Sea of Reeds and going through the desert, they came to Mt. Sinai where Moses went up to its peak to meet with God.  He told the people that he would be back after 40 days and nights.  But he was delayed on his return down the mountain, so the people panicked.  Their leader was gone.  No text from on high, no phone call, no email – just disappeared.  They figured he must be dead.  Which would mean that God had either forgotten about them, did not care about them, or was for whatever reason cut off from them.  So they implored Aaron, Moses’ brother, to provide for them an image of the gods they knew from Egypt.

We as the readers of this text see the problem right away.  Here comes Moses down the mountain carrying the tablets, and the very first commandment is to have no other gods, to make no graven images.  And what are they down there doing?  Melting down all their gold and making it into a graven image of a calf.

My friend, Ben Hollenbach, made an interesting point to me about this story.  He said, “Most people think the calf is an idolatrous distraction from worshiping God.  But the Israelites asked for the calf because they were more comfortable with it.  It was a familiar image from their time in Egypt.”

So why was it a bull-calf that was made?  Why not one of the other Egyptian gods like the frog or the sun?  In Egypt, the bull was a well-known deity.  Ka in Egyptian is both a religious concept of life-force/power and the word for bull.  But it’s not an actual adult bull that is made – it’s a calf.  Why?
Raymond P. Scheindlin, professor of medieval Hebrew literature at the Jewish Theological Seminary of America, described the situation this way:

The calf is “a sweet little thing, a mascot, almost a pet — something that would seem in need of the people’s care as much as something that could care for the people. Aaron’s calf was a god the people could identify with, a god that reminded them of themselves, a vulnerable, comfortable, available god, rather than Moses’ difficult, remote, normally invisible God hidden behind the clouds on Sinai.

(This is a) miscalculation. The soft god that reminded them of themselves was such a relief from the demanding God of Sinai, with His thundering voice and His scowling prophet, that they fell in love with it at first sight, fell to their knees, and worshiped it. They knew it wasn’t God, but they worshiped it all the same, for it was helpless like them, and cute, a god on their own scale and to their own measure, who told them that they were all right as they were — a god whose vulnerability enhanced their self-esteem. It was a god who mirrored themselves, not the absolute God mirrored by Moses’ absolute faith.”  (http://forward.com/articles/9323/the-golden-calf-as-a-symbol-of-desire-for-a-knowab/#ixzz3wh9n35wT) 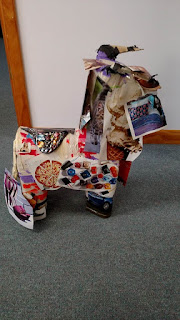 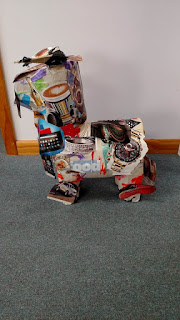 Because, let’s face it – when the chips are down, when you’re feeling stressed, when you’re feeling grief or sadness, you turn to those things that feel familiar, that give you comfort.  That’s why these images on the calf that our Confirmation students made feel so good – food, new clothes, alcohol, our car, a pet – any of these can become our god because they are what we turn to when we need to feel good. 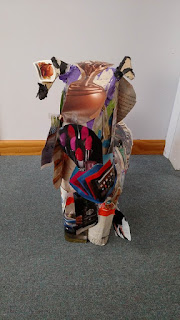 Our students learned that a god is anything to which you devote your time, money, or attention.  It’s what gives your life meaning.  It is that which you worship.  The problem, of course, is that these things or ideas are actually not God.  They are what’s known as “penultimate” – not quite the most important.  The penultimate leads to the ultimate.  But if you stop at the penultimate, you’re stuck in idolatry.

How do you know if something (or someone) is an idol for you or not?  Observe what happens when you are deprived of it, or it’s taken away.  If you believe you cannot live without it, would do anything to get it (including breaking one of the other commandments, like lying, cheating, stealing, or even murdering), then it’s become a penultimate god for you.  So for some people, gambling becomes their god – it makes them feel good and promises great riches.  For others, it’s using drugs – again, it makes you feel good and gives you a feeling of escape or power.  Even technology has become a penultimate god in our society.  We spend our time, money and attention on it.  It gives our lives meaning.  And if you take away a person’s device, or cut them off from a wi-fi signal, what happens?  They go through withdrawal symptoms!  The penultimate god can devolve into an addiction – whether it’s a person, an item, a practice, or an idea.

So for me, doing work is my penultimate god.  I spend my time and my attention on my work, and it leads me to break other commandments – even, ironically, the first one.  It’s especially difficult for pastors to honor the Sabbath because leading worship is their work!  Their work becomes their identity, and they confuse leading the Sabbath with honoring the Sabbath.  The penultimate god is really the stop-gap measure to keep us from having to face our fears and live with the demands and ambiguities of being God’s people.  Because here’s the secret fear that my addiction to work covers up – I fear that I’m actually a lazy person, so I overcompensate by working all the time.  Work is my golden calf because it makes me feel better about myself.

So Moses comes up with an interesting way of getting rid of this penultimate god.  He grinds up the calf into a fine gold powder and sprinkles it into the water and makes the Israelites drink it.  Gross, right?  Take it a step further – what happened after they consumed the gold?  What form did it take as it left their bodies?  Yes – it came out in their excrement.  Gives a whole new meaning to the word bullssssshine!

It’s actually a very appropriate punishment, because it teaches them a veritable truth about the futility of worshiping a penultimate god.  It ultimately leads to a stinky mess.  And it’s why the students put money right here on the calf’s butt!

Worshiping that which we consume is a pointless exercise.  It may fascinate us for a while.  It may comfort us.  It may distract us from our fears, temporarily keep us from feeling lost or abandoned or forgotten.  But the God of Moses is not interested in our temporary feel-good measures.  This is a God of truth and justice.  Yes, this God is asking a lot of them – and of us.

That’s why Jesus was so furious at the Temple when he saw the moneychangers.  Like Moses coming down from Mt. Sinai to the place where the people are supposed to be in prayerful expectation of a Word from God, Jesus finds a raucous revelry of rampant idolatry masquerading as preparations for worship.  The people at the Temple, just like those at the foot of Mt. Sinai, were turning to the penultimate gods of money and wealth.  Buying and selling sacrifices for the temple felt good. It was the comfortable fall-back in a time of terrible oppression and poverty when it seemed God was nothing more than an idea hidden within the Holy of Holies.

So what are we to do?  When you’ve realized what your golden calf is, then what?

The answer is:  metanoia.  Repent.  Practice letting go and turning back to the ultimate – not the penultimate – God. That’s why we have these rituals built in to our religious calendars and weekly worship.  We have confession at the beginning of each service.  You know when we have that time of silence before saying the words of confession together?  That’s the time for you to bring to mind – and bring to God – your golden calf and give it to God.  When we come to Ash Wednesday and the season of Lent in a couple weeks – that’s the time for you to practice giving up your golden calf.  Maybe you pick one day a week to go without technology.  Maybe you forego sweets during the 40 days of Lent.  Maybe you refrain from making any unnecessary purchases during those 5 weeks to put down your golden calf of consumerism.  Perhaps you make a commitment to come to Bible study on Sunday mornings during Lent, instead of carrying around your golden calf of excuses for why you won’t engage in God’s Word with your fellow Christians.

For me, honoring the Sabbath and putting down the golden calf of work once a week will be my Lenten discipline.  For 12 hours (usually on a Friday), I will commit to a day of walking and exercise, playing games with my kids, going to lunch with my husband, and spending time in prayer and meditation.

As we re-commit ourselves to God, we know it will not be the easy way.  It will mean sitting in the bullshine and realizing the messes we have made.  But through that process, the impurities of our sin are washed away by the waters of baptism – the water from the rock – renewing our spirits, our lives, our communities and our world.  Amen.