Passover and Communion – Responding with Faith in Action

I said last week in the sermon about the plagues of Egypt that when those with power and influence harden their hearts, it usually the children who suffer the most.  No one knew that better than the Hebrew and Egyptian children.  Pharaoh’s infanticide program against Hebrew babies, combined with his concentration camps in the brick-yards where children slaved away in the hot desert sun are estimated to have killed over 2 million innocent children during the Pharaoh’s reign. But no matter how many plagues they suffer, no matter how clear the warnings, Pharaoh refuses to relent.  What does it take to finally get the hard-hearted person to respond?

In Pharaoh’s case it only happens when his own son, his first-born, is found dead at midnight.  Then it all comes crashing down on him.  This is what it feels like to taste the bread of suffering like the Hebrews did for decades when they watched their own little boys floating dead in the Nile, drowned by Pharaoh’s soldiers.  This is the taste of the wet, salty tears of grief that the Hebrews drank by the gallons as they watched their children die in the hard-labor camps making bricks for Pharaoh’s palaces and pyramids.  All those innocent infants and children, cut down, starved, beaten and drowned to death.

Yes, but what about the Egyptian children on the night of the Passover? Why did God punish them for the sins of Pharaoh?  Why did God cause them to die? It wasn’t their fault.  They were innocent too.

Let’s be clear – it was not God who brought on these deaths.  It was Pharaoh.  God cannot be blamed here.  The blood is on Pharaoh’s hands.  He was given plenty of opportunities to change.  He was given clear warning by Moses telling him exactly what would happen if he did not change. But still he chose death.  He did nothing to protect his own people.  All he had to do was compromise, relent, humble himself just a little.  But he chose hard-heartedness.  He chose stubbornness. He chose to sacrifice his own son. Not God.  http://christianthinktank.com/killheir.html

It’s called moral reciprocity.  When appeals to a person’s or a nation’s sense of decency and compassion fall on deaf ears and hard hearts, the only logical result is that the violence and evil  and suffering will at some point rebound, bounce back upon the perpetrator.  It may take years, even decades for the tide to turn, but eventually the body counts reach a tipping point, and something has to change.  The killing has to stop.  Because Hebrew Lives Matter.  Black Lives Matter.  Syrian Lives Matter.  Honduran Lives Matter.  Children’s Lives Matter.  They matter to God.  Do they matter to us?

On the night he was betrayed our Lord Jesus took bread, gave thanks to God, and broke it, saying, This is my body given for you.  Do this for the remembrance of me. 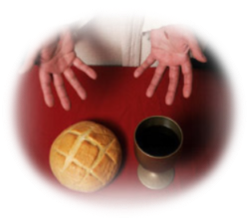 He took the cup, gave thanks and gave it to his disciples saying, take and drink.  This is my blood of the covenant which is poured out for many.

This is the blood of the lamb.  This is a remembrance that children suffered and died like innocent lambs in Israel and Egypt.  And children still suffer and die in America and Syria and Central America.  This is not a sacrifice to the god of Pharaoh – a god of violence and murder and deadly weapons.  Jesus’ death is not a sacrifice.  This is God saying – the sacrifices must stop.  They stop right here, on this day, with this meal.

Like the Hebrews who ate the Passover meal with traveling clothes on and their bags packed, we, too, will eat this meal hurriedly, with shoes on our feet, ready to act.  This is not a leisurely sit-down meal.  It’s a meal we eat on the go, on our way to serve, on our way to act, on our way to respond, to do something with the faith we have been given.

It’s a meal we eat in solidarity with our Jewish sisters and brothers who gulped the Passover food on their final night of genocide.

It’s a meal we eat in solidarity with Syrian refugees who eat their meals in cramped camps, escaping their own tyrannical murderous rulers.

It’s a meal we eat in heartbroken communion with the families students gunned down in their college classroom in Oregon, and every other family of the 140,000 shooting victims in this country over the last 11 years.

It’s a meal we eat before being sent out to answer the call of God and embark on a journey to a new place, a new phase of life, a new phase of faith, a renewed commitment to God and the church, to our family and community, to our planet and its fragile ecosystems.

For others, it will be to make a donation to help with Lutheran Disaster Response, or World Hunger.  Or it will be a decision to increase donations to this congregation so that this center of ministry of the world, this outpost of love and service, can continue to do the work God calls us to do.

Some may be moved to contact their legislators, write letters to the editor, talk with family and friends about the need to confront the Pharaoh-like powers that are conducting systemic and systematic killings of innocent children through the economic, military and political machines of our time.

For others, it will be to pick up a pair of scissors and cut pieces of cloth for a quilt that will be sent to one of those refugees.

“This day shall be a day of remembrance for you.  You shall celebrate it as a festival to the Lord; throughout your generations you shall observe it as a perpetual ordinance . . . And the people bowed down and worshiped.” Amen.
Posted by Unknown at 9:47 AM