Moses at the Burning Bush


Video of the sermon can be viewed here:  https://www.youtube.com/watch?v=KbXAx0atGBc&feature=youtu.be 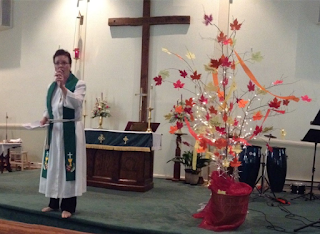 Note:  The week prior to the sermon, the congregation was invited to write down their weakness on a leaf that we then attached to the burning bush. We displayed the "burning bush" in chancel during the service.

The baby in the basket has now become a man.  Raised in Pharaoh’s household, he certainly enjoyed every privilege of being a princess’s son – a comfortable life of royalty and power, wanting for nothing, access to every privilege he could desire.  But he was always uncomfortable with this comfortable life.  Because he always knew these Egyptians were not his people.  And that the ones to whom he truly belonged - the Hebrews - were slaving away while he enjoyed this very comfortable life.

Perhaps it is no wonder that Moses suffered from a speech impediment.  Tutored by the best Egyptian teachers, the boy would have received the best education available.  He would have learned the meaning of cuneiform, the Egyptian writing made up of symbols and pictographs.  But when it came to speaking Egyptian – the words caught in his throat.  This was not his language.

The language of his people was Hebrew.  Perhaps he remembered the words his mother spoke to him as a toddler, before she weaned him and gave him over to Pharaoh’s daughter completely.  She would have taught him to praise God using those words:  Shema Yisrael, Adonai eloheinu, Adonai echad.  Hear, O Israel, the Lord is our God, the Lord is one.

This was his mother-tongue.  But the language of his palace-mother never felt right in his mind or his mouth.  The prayers to all those different Egyptian gods and goddesses never fit well for him. So when he spoke, the words came out wrong.  It was as if they were wrestling with his Hebrew words, making him stutter when he tried to speak.

He likely endured a great deal of teasing from the Egyptian boys.  Everyone knew he looked different.  His eyes were not as dark.  His skin was lighter than the other boys.  His nose was not like theirs.  His hair was different.  And his speech made him sound stupid.  Only because he was the adopted son of Pharaoh’s daughter did they hold back their mockery.  But when she was not around, he was at their mercy.  “Stupid Hebrew.”  “Where’s your daddy, sandy-skin?”  “Don’t you belong down there with the other slaves hauling up bricks?”  “He talks like he’s got a brick for a tongue.”  “Brick-tongue, brick-tongue, Moses has a brick tongue!”

This must have gone on for years, the taunting and teasing.  He wanted so badly to speak up for himself and to speak out against the ill-treatment of the slaves, to stand up for them.  But his brick-tongue crushed any words that might have arisen for him to speak.

But then there came that day when he left the palace.  He needed to see for himself what their world was like – the world of the Hebrews.  That day in the brick yard – that’s when he saw their true suffering.   When he came upon the Egyptian task master brutalizing one of the Hebrews, Moses snapped.  He could no longer contain his rage against the injustice he had witnessed all his life.  He picked up one of those hated bricks and slammed it into the skull of the man with the whip, killing him instantly.

You would have thought his kinsman would have been grateful.  But no - his fellows Hebrews had no respect for the palace-pampered prince.  In their eyes Moses did not belong with them, either.  He may have looked like a Hebrew.  But his clothes, his posture, his rich-smelling cologne all gave him the bearing of an Egyptian, the oppressor.  Word spread of what Moses had done, the murder he committed.  Now he was hated by Hebrews and hunted by Egyptians.  He had to escape.
He needed a new life.  A different life.  He needed to go someplace where no one knew him.  Where no one would care whether he was Hebrew or Egyptian.  Where no one would know whether he was a prince or a slave.  He just needed a fresh start.

And he found it.  Far to the south, down to the southern tip of the Sinai Peninsula, he found a mountain-dwelling people who took him in.  And he found a woman who accepted him for who he was – brick tongue and all.  And Zipporah’s father Jethro became like a father to Moses.  It is likely that Jethro, being the wise, observant priest that he was, knew that there was something special about Moses, even when the young man couldn’t see that in himself.  All Moses knew about himself were his weaknesses – his speech impediment and his past crime.  He was ashamed of both, so he kept mostly to himself living among the Midianites.  All he wanted was to leave everything behind and live a quiet life tending sheep alone, wandering on the mountains.

Jethro knew this, and gave his son-in-law the space he needed.  But he knew that Moses’ life was meant for something more.  And so one morning as they sat eating the meal served by Zipporah, Jethro said, “Today I would like you to set off for the mountain of Horeb and pasture the flock there.”  Being a priest, Jethro knew that if anyone had a chance of encountering the Divine, going to Horeb would be the most logical place to go.  It was the mountain of God.  Moses didn’t know that.  But Jethro did.  And so that’s where he sent Moses, hoping that his son-in-law would have an encounter with the Divine to guide him back onto the right path.

And that is where Moses found God.  Or rather, where God found him.  He had been found in the water of the Nile as a baby; now he was found by the fire on the mountain as a man. And he was a man consumed by shame, grief and loneliness.

Perhaps it was deliberate, then, that God would choose a burning bush to make God’s self known to Moses.  A bush that burns but is not consumed.  Who is this God that can create such a thing?  It is the God who speaks to Moses in his own language.  Not Egyptian, but Hebrew.  ‘I am the God of your father, the God of Abraham, the God of Isaac, and the God of Jacob.’  Those names, like a faint childhood memory.  Moses recalled his mother speaking to him about those men, about where he comes from, about the people who are his kin.  And now here this God who is speaking to him from the fire, telling him that he is to free his kin from the Egyptians, and that a land of freedom is prepared for them.

You would think Moses would have been excited by this news of liberation.  But no.  How does he respond?  Like a kid with a brick tongue and a checkered past.  “Who am I?  Who am I that I should go to Pharaoh and bring the Israelites out of Egypt?”

Ah, but you see, it’s not just about who Moses is.  God’s response is:  “I will be with you.”  It’s not just about who you are, it’s about who I am, says God, and what I will do, and the promise I make to you right here on this mountain.  You are like this bush – you may have any number of faults and sins in your past.  But I will not let them consume you.  In fact, I will use them to bring light to the people.

Where is your leaf on the burning bush? 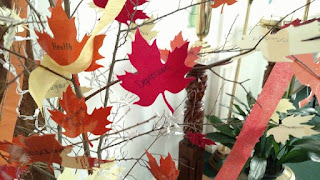 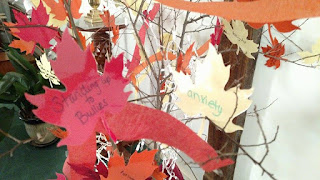 I know where my leaf is.  I know the thing that I am not proud of, the aspect of myself that is my weakness, what I would rather run away from.  I know what part of myself and my past threatens to consume me.  But I also know what happens when God enters into that burning bush.  Moses’ encounter with God on that mountain tells me two things.  First, God has the power to keep me from being consumed by my past and by my faults and weaknesses.  And second, God can use our weaknesses to provide light to others.

Where is your leaf on this bush? 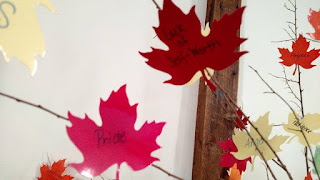 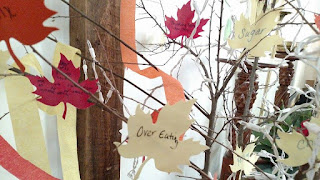 What is the shame or crime or mistake or weakness you have that when God gives you a mission, gives you your marching orders, offers you an opportunity to bring light and hope and warmth to another, what is it that causes you to echo Moses’ words:  “O my Lord, please send someone else.  I’m not the man or woman for the job.”

Yes, you are, answers the Lord, the fire shooting up into the sky.  And you’re not going to have to do this by yourself.  I’m sending your brother Aaron.  He will help you.  Do you hear that?  Not everyone back home has rejected you.  Aaron has been hearing about you from his sister from the time he was a child.  You’ve never met him, but he’s been watching you from afar.  And when you came to the brickyard that day, he was there.  He noticed, he saw, he was inspired by your courage and your righteous indignation.  Finally, finally, someone is willing to stand up for us, to be our advocate.  You tried to run away, but he followed you.  He came to find you.  Together you will lead your people out of slavery and into freedom.

I don’t know how God is speaking to you today.  Probably not a burning bush.  Or maybe it is.  I don’t know what your faults and past and weaknesses are.  Probably not a speech impediment or the crime of taking a life.  Or maybe it is.  But I do know this.  Wherever you are right now, God has a job for you to do, and God is not finished with you yet.  You are not alone.  Your Jethro is guiding you.  Listen to him or her.  And even now, someone has noticed you, is coming to find you, and wants to work with you to change things, to make things better, to bring light and warmth and hope into this world.  Your Aaron is on the way.