Sermon: Baby Moses in the Basket 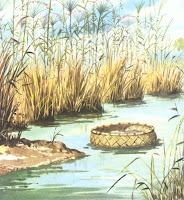 Click here to watch the video of this sermon:  https://www.youtube.com/watch?v=T0wyMIzZXAo&feature=youtu.be

Last year, as many of you may remember, we read through the first book of the Bible, Genesis, and did a preaching series highlighting the major stories, characters, and themes of this foundational book.  Some of us got to see the last story of that book on the stage of Sight and Sound theatre when we went to see the production of Joseph.  As you’ll recall, Joseph was made second-in-command of the entire nation of Egypt in order to prepare it for the coming famine.  When Joseph’s brothers came to Egypt seeking food, he eventually reconciled with them and brought his entire tribe to settle in the land of Goshen and, apparently, live happily ever after, cue the fanfare and close the curtain, right?

Wrong.  Now we’re onto Exodus where it’s 400 years after Joseph’s rule, and the Egyptians no longer remember or care what this Hebrew Joseph did for their nation.  All they know is that his progeny have so outnumbered them, they believe they must keep them enslaved so as to avoid their nation being overthrown.  In a story that has, unfortunately played out too many times throughout history, an entire people find themselves oppressed, enslaved, used and abused by the more powerful nation.  It has happened several times to the Jewish people throughout history.  It happened to Africans brought to this country.  It happened to Africans in South Africa.  It happened to Native Americans in this nation.

This story of the Exodus gives the template for life being as bad as it can be when you live without freedom.  You are not free to worship God.  You are not free to make your own decisions, or enjoy the fruit of your labors.  Your body is not your own.  Your life is not your own.  We’ll see later how the Ten Commandments are very much in response to the Israelites not having freedom.

But right now, we’re standing at the water’s edge next to a mother who is desperate to save her infant son. 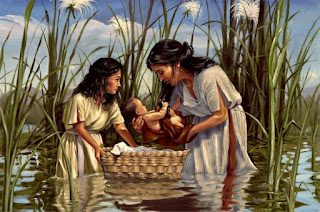 The Egyptians have come up with a plan to kill all male babies among the Israelites. Kill the males, and you lessen the chances of rebellion.  It’s the same logic Herod had when he ordered the killing of the male children when Jesus was born.  But neither Mary nor Moses’ mother see a future leader of a rebellion when they look at their infants – they see only their baby boys.  And on that morning by the Nile River, Moses’ mother watches him sleep peacefully, having fed at her breast one last time before placing him gently in that basket.

It’s interesting to note the Hebrew word for basket:  tebah (tay-vah).  It’s the same word that’s used to describe the boat in which Noah and the animals floated back in the book of Genesis.  That’s right.  Moses is in his own little ark.  And just as the future of human and animal kind was kept safe in that vessel so long ago, now the future of this child and the people of Israel are dependent on this little miniature ark to keep them safe.

I can imagine Moses’ mother and sister collecting the grasses and reeds they would use to weave that basket.  The care his mother put in to making sure that the strands were pulled together as tight as possible so as to keep the inside dry. 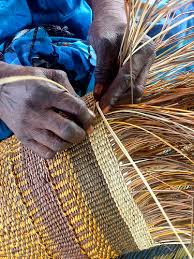 The speed of her fingers as they worked feverishly to finish the basket by the morning, just in time for the sun to rise over the banks of the Nile so that she could see the silhouette of Pharaoh’s daughter making her way down the bank for her morning bath.

Last week, we heard the lullaby of the mother singing to her son in Love You Forever.  And I wonder if Moses’ mother sang a similar song to him as she placed him in that basket, the water of the Nile River lapping at the hem of her robe:  I’ll love you forever.  I’ll like you for always.  As long as I’m living, my baby you’ll be.

What does it mean to put that which you hold most precious into the care of God’s basket, that tebah, that little ark?  To cast your care into that vessel and set it onto the waters, hoping against hope that what you have placed there will arrive safely?

I think of African American mothers and fathers whose hearts are always at the water’s edge as their sons and daughters go into the world, worrying that they may be shot dead simply because of the color of their skin.

I think of parents of gay, lesbian, transsexual or transgender sons and daughters whose hearts are at the water’s edge, worrying that they may be discriminated against, cast out, or endure violence simply because of the person they love.

I think of parents of daughters whose hearts are at the water’s edge as they send their young women to college, worrying that they may be targeted for sexual violence.

I think of the fathers and mothers of children in countries overrun by gangs in places like Honduras or El Salvador, desperate to get their children out of harm’s way, and knowing that torture and death await many of them.

And I think of the father of Aylan Kurdi, the three-year-old refugee from Syria whose drowned body washed up on the shore of Turkey. 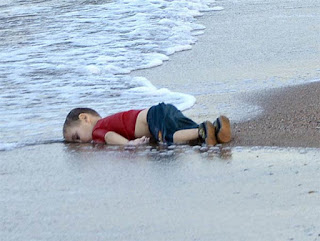 All the family wanted to do was to escape the war in their country.  They, like Moses’ mother, were desperate to survive and did whatever they could to help their children live.  But Aylan, his brother, and his mother did not survive when the boat that was supposed to carry them to freedom capsized.  The image of that little lifeless body is now emblazoned on millions of eyes around the world.  We all stand at the water’s edge.  Will we be like Pharaoh’s daughter and do something – anything – to help a desperate family?  Or will we stand in our palaces, our hearts hardened like Pharaoh himself, impervious to the pain?

At the prayer table downstairs, the card I picked was this one – a mother holding her child, her face drawn down in despair, wanting nothing more for her child than for him or her to be safe, to have a place to live, to be free from violence, to have access to clean water and healthy food, to have freedom to simply live.

Each of you as you came in today was also asked to choose a word or an image on a card that represented for you something that you want to entrust to God in prayer.  Take a look at that card again.  During communion, you will have an opportunity to place that card in the basket as a symbolic gesture of casting your concerns into the care of God.

We, like Moses’ mother, each stand at the water’s edge, the waters of baptism lapping at our feet, reminding us that while the waters can be unpredictable and do have the potential to be dangerous, they also have the capacity to be cleansing and life-giving.

Our prayers are so powerful.  They are not magic.  They will not immediately right all the wrongs in the world.  But they are a first step toward aligning our thoughts, and then our actions with the God who weaves herself into the strands of our baskets, holding us, holding our loved ones, holding our prayers in a place of safety.

“You found me,” we’ll be singing in our song.  God will find you, whether you are standing at the water’s edge, or huddled in the basket, or walking down the bank of the river, or standing in a palace built by the labor of slaves. 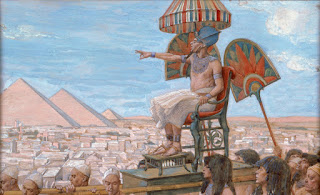 God will find you.  And your life will never be the same.