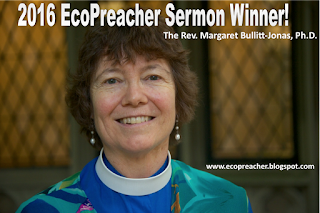 Congratulations to Margaret Bullitt-Jonas whose sermon “Sacred Earth, Sacred Trust” is the winner of the 2016 EcoPreacher Contest!  Margaret will receive a signed copy of Creation-Crisis Preaching: Ecology, Theology and the Pulpit (Chalice Press, 2015) and I’m featuring her sermon below.

Margaret serves as Missioner for Creation Care in both the Episcopal Diocese of Western Massachusetts and the Massachusetts Conference of the United Church of Christ. She preached this sermon on June 12, 2016, at a special service that brought together First Congregational Church and St. John’s Episcopal Church in Ashfield, Massachusetts. June 12 was a day when people of many faiths around the world celebrated a day of prayer and action for Earth, our common home. It was also a day that marked the six-month anniversary of the Paris Climate Agreement, and the first anniversary of the publication of Pope Francis’ landmark encyclical, Laudato Si.  This sermon was part of the chorus of voices announcing that the Earth is holy and that it deserves our protection and care.  You can learn more about Margaret’s work on her website:  http://revivingcreation.org/. Notice how Margaret uses all three aspects of the three-fold approach I recommend in my book Creation-Crisis Preaching: “flowering” (consciousness-raising), “leafing” (calling for specific action) and “fruiting” (transforming lifestyles and culture for long-term, sustainable change) in this sermon.
--------------------------------------

“Naboth said to Ahab, ‘The LORD forbid that I should give you my ancestral inheritance.’” (1 Kings 21:3) 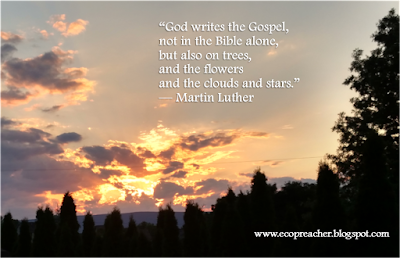 Whenever you and I re-awaken to God’s presence in our hills and woods, in the grasses and dirt beneath our feet and in the stars overhead, we discover again that we are connected not only to other human beings but also to everything else. We are part of the web of life: connected by our breath, blood, flesh, and bone to the whole creation.  As our Protestant forebear, Martin Luther, pointed out: “God writes the Gospel, not in the Bible alone, but also on trees, and the flowers and the clouds and stars.” God’s love and presence are everywhere – not just in church, not just inside a sanctuary built by human hands, but also outside, in the sea and sky, in the humble tomato plant valiantly trying to grow in my shady garden.  The crucified, risen and ascended Christ fills all things, sustains all things, and redeems all things.  Whenever you and I come to our senses and realize that God is giving God’s self to us in every part of creation – in this breeze and bird and leaf, in this breath, in this heartbeat – then reverence springs up in us, and a deep desire to give thanks.  We realize again that the Earth is sacred, and in the strength of that heartfelt wisdom we can fight the great battle of our time, which is to protect the integrity of God’s creation, to preserve a habitable planet, and to build a more just and sustainable society.

A record 175 countries have already signed the Paris Climate Agreement, which is an historic first step toward limiting the ravages of climate change.  But the Paris Agreement is only a start.  It doesn’t go nearly far enough.  Its provisions won’t cap the rise of the world’s average temperature at 1.5˚ Celsius above pre-industrial times, which is the uppermost limit for ensuring a stable climate and livable planet.  Unless we get to work in every community and every sector of society to reduce our carbon emissions, unless we push political and corporate powers to keep fossil fuels in the ground and make a swift transition to clean, renewable energy, then the average global temperature is going to shoot far past that critical threshold of 1.5˚ Celsius.  Around the world, scientists and activists, vulnerable communities and communities of faith are fighting to avert runaway climate change.  Their cry and our cry is “1.5 to stay alive.”
I usually take the Gospel as my sermon text, but this week I must turn to the Old Testament passage, that hair-raising story from First Kings about a powerless citizen being framed and murdered by an unjust king and queen so that they can seize his land.  Naboth has a vineyard beside the royal palace.  When King Ahab makes what sounds on the face of it like a reasonable offer to buy the vineyard, Naboth turns him down: “The LORD forbid that I should give you my ancestral inheritance” (1 Kings 21:3).  Calling the land “my ancestral inheritance” suggests that the land has been in his family for a long time and also that he holds the land in trust.  To Naboth the land is not just a commodity, not just real estate, not just a source of profit and gain: it is a gift from God; it is sacred; it is entrusted to his care. 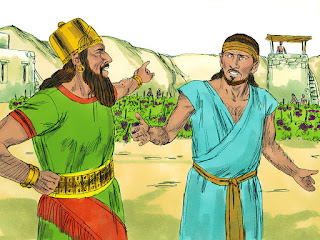 King Ahab is frustrated.  He goes home “resentful and sullen” (1 Kings 12:4), lies down on his bed like a pouting child, and refuses to eat.  Enter, then, the strong negative character of the story, Queen Jezebel, who basically asks, “Hey, don’t you have power to do whatever you want?”  She tells him to quit moping; she will take care of this.  Using Ahab’s credentials, she arranges for “two scoundrels” (1 Kings 12:10) to make false charges against Naboth in front of the city council and to have him stoned him to death.  And so the deed is done: through backroom dealings that include perjury, conspiracy, and theft, Naboth is framed and murdered, and the king claims the vineyard as his own.
This is an almost archetypal story about dirty politics, about violence and the misuse of power.  It resonates down through the centuries and up to the present moment.  A few days ago, when I was visiting Union Theological Seminary in New York City to speak to an ecumenical group of clergy who had gathered from all over the country for an intensive, weeklong training on climate change, I learned that activists fighting to stop construction of a trash-burning incinerator in a low-income neighborhood of Baltimore are using the story of Naboth’s vineyard to illuminate their own experience of social and environmental injustice.
The mindset that allows Ahab and Jezebel to kill Naboth so that they can grab his land is the same mindset that allows governments and businesses to push aside low-income people and indigenous peoples and people of color to exploit, pollute, and take possession of their land, the same mindset that allows a nation to go to war against another nation so that it can seize control of another country’s natural resources, the same mindset that allows the fossil fuel industry to keep expanding its search for more oil and gas, despite the enormous human cost – especially to the poor – of burning fossil fuels.  Injustice against human beings is intimately linked to desecration of the Earth. 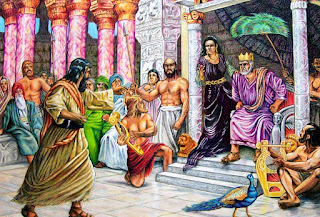 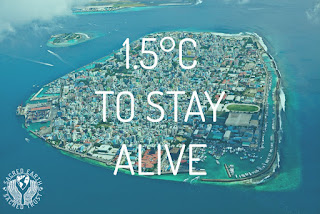 Thanks to one of our members, Bob Parati, we have a sign that proclaims, “1.5 to stay alive.”  After the service, I invite anyone who wishes, to join me outside so that we can take a group photo.
I invite you to do some other things, too.  If you haven’t done so already, I invite you to join Climate Action Now, our vibrant, local grassroots climate action network.  I’ve put a sign-up sheet in the back of the church, so you can receive Climate Action Now’s terrific weekly newsletter.  I will also gladly share your name with a new interfaith climate group I’m helping to lead, Massachusetts Interfaith Coalition for Climate Action.
Thanks to some of the people in this room, and to people like you, Kinder Morgan’s NED pipeline was stopped.  Now the fight is on to stop another dangerous and unnecessary fracked gas pipeline, Spectra Energy’s West Roxbury Lateral pipeline.  Two weeks ago I was arrested in Boston along with fifteen other religious leaders after we sat down on the edge of the trench that runs down the middle of the street where the pipeline is being constructed.  Sitting at the edge of that trench was like sitting at the edge of an open grave, proclaiming the power of love and life as our legs dangled in the pit.  We clergy came from a variety of denominations and traditions – American Baptist, Buddhist, Episcopal, Hindu, Jewish, Presbyterian, United Church of Christ, and Unitarian Universalist.  We represented a range of religions, yet all of us were drawing from a holy power greater than our selves.  All of us were rooted in a reality that transcends the unjust structures of this world.  And all of us were fired by the vision of a better world, by faith in the human spirit, and by faith that God would guide us to courageous and visionary action. We prayed and preached and sang until the cops handcuffed us and took us away.

More resistance is ahead.  I invite you to consider joining a group from western Massachusetts that will protest the West Roxbury pipeline on June 28, and I invite you to consider joining a march against new gas pipelines that Better Future Project will lead in mid-July. I’d be glad to speak with you about those events, after the service.
Near and far a wave of religious protest and activism is rising up around the world as we respond to the cry of the Earth and the cry of the poor.   The first followers of Jesus tapped into a source of love and power that gave them strength to challenge injustice.  And we tap into that holy power, too.  Here at this table, we followers of Jesus will share in the bread and wine of the Eucharist, knowing that God will give us strength for the journey and will nourish our hungry souls.  The Church was made for a time like this – a time when God calls all people to recognize that we form one human family and that the Earth is sacred and entrusted to our care. Just as Naboth said to Ahab, so we, too, say to the powers-that-be, “The LORD forbid that I should give you my ancestral inheritance” (1 Kings 21:3).  With the Spirit of Jesus to guide us, we head into the world to proclaim the good news of the reign of God.