Droplets of Paradox: The Ripples of Our Baptismal Calling

The texts assigned for this Sunday originate from different times, different authors and out of the midst of different communities.  Imagine them as droplets falling into the still baptismal font on Sunday morning.  The ripples of each drop merge with the others, creating movement across the surface, stirring the waters of our faith. 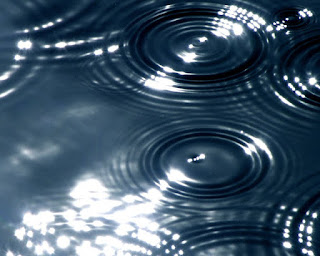 The tension in Isaiah 49:1-7 is palpable.  The speaker is held taut between his call to prophetic ministry and feelings of frustration in seeing nothing come from his work.   For those answering the call to ministry, this text speaks to the kind of tension we experience as well, caught between two poles of paradox.  At one end is the undeniable call to preach to every nation from coast to coast, calling for people to heed God’s message of justice, reconciliation, and restoration for our planet.  At the other is the undeniable experience of utter despondency because either not enough people are heeding the call, or the response is happening too slowly.  Especially for those of us who have felt “deeply despised” for attending to this call, the announcement that “Kings shall see and stand up, princes, and they shall prostrate themselves, because of the Lord, who is faithful, the Holy One of Israel, who has chosen you” (v. 7) seems like a pipe dream at best, and a cruel lie at worst.

Charles Campbell and Johan Cilliers talk a great deal about paradox in their book Preaching Fools:  The Gospel as a Rhetoric of Folly (Baylor University Press; Waco, TX, 2012).  "Paradox could be described as holding together irreconcilable opposites in order to create and sustain liminality," they explain (185).  Liminality is "the experience of being and moving in between spaces and times,” (39), and, for preachers, involves actually creating that in-between time and space so that people can come to experience the transformative work of God.  They note that is exactly when the church’s existence seems ludicrous that the foolish message of the preacher is needed.  Especially “during periods when the church has power and accommodates to the political and social structures,” preaching fools are necessary. They are needed to “interrupt the status quo by unmasking and deconstructing the structures of the day,” (154).

Campbell’s and Cilliers’ words resonate strongly given the way in which many church leaders have either acquiesced or actually thrown their support behind the incoming president who has threatened to derail much of the progress that has been made toward protecting God’s Creation, ensuring equal rights for all citizens, and providing for access to basic human needs such as a liveable wage, housing, health care, and education, for example.  From appointing racist, xenophobic, pro-fossil-fuels leaders to the highest positions, to vowing to withdraw the U.S. from the Paris agreement to curb carbon emissions, to threatening to require a Muslim registry, to belittling everyone from the disabled to women to immigrants, to calling climate change a “hoax,” (and the list goes on), it can feel as if all our work on environmental, racial, gender and so many other social justice issues is being derailed, undermined, and erased. 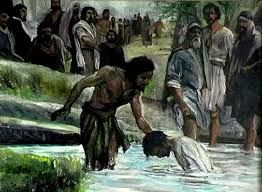 It is into this kind of fraught time that Jesus came a-wadin’ into the baptismal waters to be baptized by John.  The Baptist was one of those prophets who drew the ire of the political leaders.  He was not afraid to use his powerful proclamation to create a liminal space, critiquing the abuse of power, and calling people to repent of both individual sins and systemic evil.  He must have known his ministry was bound to meet a violent end.  So to see the One who was at once timeless and “right on time” stepping into the waters of the Jordan must have been an answer to fervent prayer.  The ripple effect of Jesus’ baptism would indeed reach the furthest coasts, “to the ends of the earth,” (Isaiah 49:6).

Campbell and Cilliers remind us that we stand in a long line of “preaching fools” from St. Francis of Assisi to Desmond Tutu, who have “emerged in times when the church (or significant parts of it) has settled comfortably into the status quo and adorned itself with power.  The church, in fact, cannot do without the curious character called a fool, who prospers in times of liminality, as well as in times of stagnation and accommodation," (155).  So as much as you may feel caught in that tension of paradox, or unsure whether to preach in a way that creates liminality, I would encourage you to hold steady in your prophetic task and watch for what God is doing.

You may try asking of Jesus the same question posed by the two disciples who began following him, “Where are you staying?”  In other words, where can we find you, Jesus?  Where have you located yourself?  And then we must keep our eyes and ears tuned to the answer: “Come and see.”  Because it is likely that we will find the Lamb of God in the most unlikely, but nevertheless, life-giving places.

For example, the Preaching Fools authors relate a story told by Barbara Lundblad who described visiting a neighborhood in the South Bronx, New York:

[It was] a neighborhood marked by poverty and violence, with numerous 'shrines' painted on the sides of buildings in remembrance of young people gunned down on the streets. 'Picture after picture after picture, until we could not bear another,' Lundblad comments after viewing a slideshow of these shrines.  But in the midst of this neighborhood, Lundblad is shown some brightly colored church doors: 'The doors, once covered with graffiti, had been transformed into gospel doors by youth of the parish.  Almost every week, teenage artists paint a new scene, their interpretation of God's good news for their community.  I wish you could have seen the painting on those doors!  On the left-hand door, a young boy had opened up a fire hydrant – a New York City ritual on stifling summer days.  Water was gushing out in a cooling stream that flowed in a wide arc from one door to the other.  When it reached the right side, the water splashed into the baptismal font, making one continuous stream from the font to the street and back again.  Beneath the flowing water, a table was set: a loaf of bread and a cup of wine, along with a whole roasted chicken and a quart of milk - sacraments of life in the midst of the city.  I knew we were in the South Bronx.  The sign on the corner said Prospect Avenue and 156th Street, but we had come to Galilee.  Jesus was there in the doorway, very much alive.  As usual, he had gotten there ahead of us.' [187, quoting Barbara K. Lundblad, Transforming the Stone:  Preaching Through Resistance to change (Nashville: Abingdon, 2001) 27]. 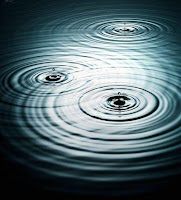 Where are the droplets of baptism falling around you?  What are the signs that justice is still stirring the waters in the midst of political upheaval? That grace is flowing like water over seemingly impenetrable stones of hatred, poverty, xenophobia, misogyny, white privilege, and environmental destruction?

As Campbell and Cilliers remind us, "God's weak power humanizes, gives back, and enhances life.  Christ, the powerless One, gives life in abundance.  In God's compassion lies God's power - the foolish power of God's compassionate weakness,” (58).  Claim that power, and proclaim that abundance.  Let your own droplets fall into that font and stir the waters!