Eco-Reformation Sermon: The Questions that Dare Not Go Away 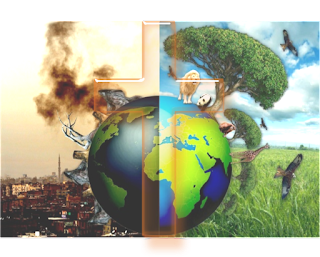 I was once cautioned by a Lutheran elder to beware of my pursuit of developing a Lutheran approach to ecology and environmentalism.  “All this talk of ‘saving the earth’ that I hear nowadays sounds like works righteousness. We are saved by faith, not works,” she reminded me.  “So you’re listing dangerously close to Lutheran heresy by insisting that there is something humans can do to save the planet.”

In one sense, she was correct.  It is important to be aware of the risk of human-centered ecological works-righteousness and firmly recognize that God is the source and agent of human involvement.  In other words, it is not we who save the Earth, but the Triune God working in, through and among us who saves us all.

But her warning also seemed to shroud a more serious sin – ecological quietism.  The danger of our Lutheran doctrine of being “saved by faith alone” is that we go to the other extreme of what Dietrich Bonhoeffer called “cheap grace” which requires no response and no action.  Cheap grace excuses us from doing the work of Christ in this world.  Thus we can rationalize avoiding taking action on any justice issue – including ecological justice – by convincing ourselves that as long as we’re justified by faith, God will take care of the rest.  But that’s not what Martin Luther meant, nor what he modeled.

The stories we will tell about Martin Luther on this day and over the next year as we celebrate 500 years of the Reformation will be so important as we remember who he was, what he did, and how our identity as Lutherans is shaped by the events that happened five centuries ago.  Would Luther approve of what Christians of his namesake have been doing over the past 60 years working to restore Creation?  Or would he shake his finger at our misguided deeds?

It’s helpful to remember that what drove Luther to that church door in Wittenberg, Germany, with his theological critique in hand was the fact that he paid attention to the suffering of souls around him. And that his anguish for himself and for them led him to ask questions.  In his book What to Remember When Waking, the poet David Whyte writes about “the question which has no right to go away.”  On the cusp of Luther’s writing of the 95 Theses that would start a tidal wave of transformation across Europe, Martin Luther raised questions that had no right to go away.  Questions like:

“Who is this God we worship?”
“What does God require of us?”
“Why are we told to be content with the answers that have been given to us without our input?”
“What has to change in order for us to fully experience the grace of God?”

And those questions led him to the source of suffering located in a particular narrative about God and salvation that had been constructed over the course of 1000 years.  It was a narrative that benefited a select few while putting undue burdens on the great majority to uphold that system. So Luther’s questions started a conversation that did not fit into the dominant narrative, that disrupted the pattern of what had been passed down for generations.  It was not well-received by those in power, but Luther’s questions and the ensuing conversation were part of a truth-telling that was intended to set us free (John 8:32).

Lutherans today who are concerned about re-forming the church toward an ecological responsibility are also attending to the suffering of others.  From species disappearing, to coral reefs bleaching, to entire communities flooded, and others devastated by drought, the effects of fossil-fuel induced climate change and human violation of God’s Creation have all spurred us to ask questions that have no right to go away.  Questions like:

“How are we to understand God’s Creation and our relationship to it?”
“What do God and Creation require of us?”
“Why are we told to be content with answers that have been given to us without our input?”
“What has to change in order for us, for all of humanity and the rest of Creation to fully experience God’s grace?”

Like the Reformation of the 16th century, this Eco-reformation being led by a handful of Lutherans is also disruptive and disturbing.  It interrupts the way we’ve been telling the story.  That story about humanity’s dominion has benefited a select few while putting undue burdens on the great majority to uphold the system.

We do not do this work of Creation-care in order to be saved or to be justified by God.  We do this work because we are saved and justified by God.  For me, Martin Luther models the passion to be angry about the way things are.  This is righteous anger that led him to take action: writing, preaching, debating, reading, teaching, and speaking boldly against the powers that are causing great and needless harm.  This passion led to courage to take action on behalf of that faith active in love.

Do you know what the root word of “courage” is?  It is the French word cor, which means “heart.”  So having courage means having the heart to ask the questions, to engage the conversation, to name what is wrong and who is hurting.  The Eco-reformation is inviting us into courageous conversation.  This conversation is so difficult because we hardly know where to begin or what to say, since what is happening is so huge, it is something we can barely wrap our minds around.  So there is, at best, a hesitancy.  At worst, there is a denial that the conversation is even necessary. 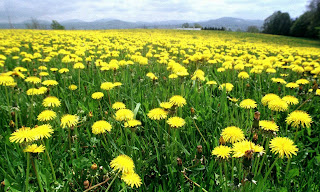 But as Luther’s opponents discovered, once the question has been asked, it cannot be unasked.  It cannot be contained. The Reformation spread like dandelion seeds across a meadow and quickly took root as a thousand yellow flowers across a landscape of despair.

Similarly, the conversation about our relationship to God and Creation has already started. It's a conversation that's going to happen with you or without you.  So we have choices to make.  We can either choose to be part of that conversation, or we can resist it, deny it, or try to silence it.  And then the choices will be made without us.

You are invited to plop yourself down in that meadow and immerse yourself in the beauty – as well as the pain – that the conversation entails.  In the meadow we must ask ourselves, what is the courageous step for us to take now?  When we ask that question, admittedly, it leads us to the direction that we don’t want to take.  Because it will mean leaving behind a way of being and doing and driving and eating and selling and buying and consuming that is causing great harm.  But when we ask those questions, we find ourselves being apprenticed to something much larger than ourselves, to a God who invites us to abad and shamar, to till and to keep (Genesis 2:15).

Like Luther, we are facing frightening prospects of what lies ahead for us.  At great personal cost and sacrifice, he made his stand for truth.  He could do no other.  We can take heart – take courage – from the God of Luther who knows that we face stakes even higher than the pre-industrialized and pre-nuclear era of 1517.  In the face of planetary collapse we plant trees.  We write letters to the editor and to our elected officials.  We march in protest.  We teach our children how to ask questions and engage in those courageous conversations.  We invent to ways to conserve and create clean energy.  We preach sermons that proclaim the truth of the laws of nature, as well as the gospel of Christ’s death and resurrection.  And we remember Bonhoeffer’s words in his book Ethics:  “The world still stands; the end is not yet here; there are still penultimate things which must be done, in fulfillment of the responsibility for this world which God has created,” (127).

Take heart!  Be of good courage!  The God of those small but mighty questions is alongside us, within us, and – sometimes in spite of us – still at work through us.  This world which God has created is ready for us to get to work!