The parables of the lost sheep and the lost coin in Luke 15:1-10 are well loved because of the message of hope implicit in each story.  The picture of Jesus with the lamb on his shoulders, rescued from the jaws of death, is a favorite in religious artwork. 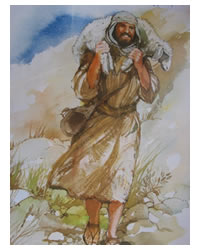 And how beautiful for Jesus to lift up a common woman doing common housework in the context of a strongly patriarchal culture as an illustration of God’s kingdom.
The text begins with Jesus asking a question:  “Which of you . . .?”  Who would actually leave behind the ninety-nine sheep to look for just one?  Who would expend so much effort for one coin?  It’s likely that not many would have raised their hands in Jesus’ original audience.  They’re just not valuable, so the effort doesn’t seem worth it, some would say (including the Pharisees in the crowd around Jesus).

But there are those who are indeed compelled to look for the lost.  And there are others who are extremely grateful for those who do that kind of seeking.  Just ask those pulled from the rubble in earthquakes, or on Sept. 11, 2001, in New York City and Washington, DC.  Just ask the miners who were rescued in aChilean mine in 2010.

Or ask someone who knows what it’s like to be lost – losing one’s way in life, straying from the path and vulnerable to all manner of threats, or inadvertently left behind.  It is a sick feeling in the pit of your stomach realizing that you are in a state of lost-ness – both for the lost one, and for those who are desperately seeking the one who has disappeared.

But what about those for whom we have been seeking for a very long time, and still there is no trace?  What about those on Sept. 11 whose lives were indeed lost and whose remains have never been recovered?  What about the hundreds of thousands of refugees fleeing from violence who become lost along the way and are never found?  What about the relationships that we have tried to recover, but for whatever reason, seem to be gone forever?

I once ministered to the family of a man who had disappeared without a trace.  He simply kissed his grandchildren good-bye one afternoon, texted his wife not to look for him and that his leaving was not her fault, and was never heard from again.  His picture was shared across the Internet and across counters at stores near where his cell phone was last pinged.  The family searched everywhere they could think of to find him.  The police and local media did all they could to find a clue about his whereabouts.  Not even his vehicle could be found.  They did not know if he had taken his own life, or had gone into hiding, or had been kidnapped.  All they knew was that he was lost and could not be found.

After many weeks we decided to gather the family together.  We could not have a funeral.  But we gathered around a bonfire in the backyard for an evening vigil and prayer service.  We sang hymns and read Scripture – including this story of the lost sheep.  Then friends, neighbors, church folk and family members took turns sharing their thoughts, their anger, their confusion, and their pain – all in a circle of prayer around the fire, lighting candles in the gathering darkness.  Then we commended him to God and consecrated the ground – wherever he was – asking God to bless that place.  While he may be lost to us, he is not lost to God.

God is the woman sweeping the house, shining her lamp in the darkest, most out-of-the-way places.  And one way or another, we will be found.  Because we are more precious than even a silver coin.  We are more cherished than even the lost lamb.

This does not mean that those of us left with nothing but grief and anger and loss do not still feel the anguish of not knowing what happened, what went wrong, forever wondering where the person is.  But God will not stop looking for us either, in the midst of our despair.  The pain does not go away.  But neither does God.  The lost will be found. Amen. 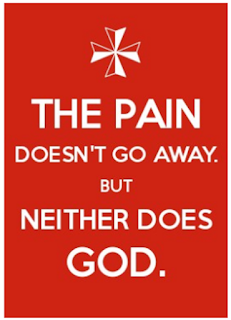