I invited some of the students to share their reviews as a guest blog post.  Here is one by . . .
Julia Tolin
Environmental Ethics
Instructor:  Dr. Leah Schade
Review: Chasing Ice: My Ecological Revelation 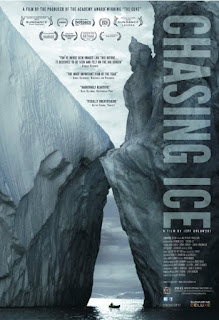 This film was the pivotal point that led me to an important environmental self-realization. I have been aware of the issue of receding glaciers and how it affects the rising sea levels for a long time. However, I have never truly been emotionally affected by this issue until I viewed this film. In Chasing Ice, the amazing efforts of James Balog to educate the world on the pressing and very alarming issue of receding glaciers are documented. The film was hauntingly beautiful in a way that forced my eyes to open and face the issue head on. There was not a moment that I took my eyes off the screen. This documentary was purely scientific and based on Balog’s travels and time-lapsed photos that challenge us to consider the implications of our actions on other living things around us.
Chasing Ice follows the journey of Balog and his process of conducting the largest and most impactful glacial survey ever completed, called the Extreme Ice Survey (EIS). Twenty-five cameras were set up across Iceland, Greenland, Montana and Alaska, and shot a frame every hour there was daylight. Each camera produced 2,300 frames over a period of 6 months, totaling about 60,000 frames from all 25 cameras. In the words of Balog, “I never imagined that you could see features this big disappearing in such a short period of time. But when I did, when I saw that, I realized, my God, there’s a powerful piece of history that’s unfolding in these pictures…”. In one specific “calving” event (a glacial event that occurs when shards of ice break off at the end, or terminus, of the glacier), a section of a glacier equivalent to the length of five football fields (approximately 1,500 feet) in Greenland occurred, in less than an hour. The forward-moving motion caused by calving creates the instability of the terminus, causing the entire glacier to shift. The pieces of ice that break off of the glacier in a calving event are called icebergs.
It is absolutely imperative that our society understand that the climate that sustains our world is changing. Plants and animals are going extinct, and within the next 200 to 300 years, an anticipated mass extinction will occur. China has to pollinate crops by hand, and the length of the fire season in the Western United States has increased by over two months.
Theologically, there is boundless evidence and teachings that show us the importance of connecting ourselves with nature. Religion represents nature’s voice, as Roger Gottlieb states “Spiritual teachings have celebrated and consecrated our ties to the nonhuman world, remind[ing] us of our delicate and inescapable partnership with air, land, water, and fellow living beings”.[1] Balog explains that our society is in denial by claiming that climatologists are preaching garbage science. But the truth is that these icebergs are dying right in front of our eyes, and there is no denying it. As he explains, “If I hadn’t seen it in the pictures, I wouldn’t believe it was real.” Through the camera we are able to become aware of events outside of our own bodily experiences. However, for some reason we seem to turn a blind eye, even when we have easy access to tools that can raise awareness about the preservation of our natural world.
We need to understand the risks of our actions, as well as our moral obligation to protect the environment. My experience with this film has made me question why our society is the issue of climate change. Films such as Chasing Ice are clearly laying out how our environment is suffering from our careless habits. Why do we continue to claim that climate change is just a figment of our imagination, that it is normal? It deeply concerns me that we can be so nonchalant and place the responsibility of reversing the dying environment on the next generations.
Many experts, including ecological theologian Cynthia Moe-Lobeda, are desperately trying to get our society to understand this fact. Moe-Lobeda argues in her book Resisting Structural Evil, that “One young and dangerous species now threatens Earth’s capacity to regenerate life as we know it. Homo sapiens are using and degrading the planet’s natural goods at a rate that Earth’s ecosystems cannot sustain.”[2] Our earth cannot keep up with our destructive habits. In the close observation of the Greenland Ice Sheet, Balog shows that glaciers are not only receding, but thinning at the same time. Over a period of 6 months, retreat of the glacier in terms of vertical change is equivalent to the height of the Empire State Building. That is 1,454 feet of melted ice that happened in only six months. The Solheim Glacier in Iceland was also examined by Balog and the EIS team for four and a half years. From 1900 to 2000 (100 years), the glacier retreated 8 miles. In a short period of 10 years from 2000 to 2010, the glacier retreated 9 miles. This terrifying statistic cannot be explained by natural climate fluctuation.
GreenChristianity author Mark Wallace suggests five ways to lead humanity to a sustainable future. He explains that if we try to find God everywhere, read the Bible with green eyes, enjoy the flesh, eat well and live a vocation dedicated to justice, then we will be able to preserve our earth. Environmentalists all over the world, like Wallace and Moe-Lobeda, are trying to get our society to realize the destruction we are causing.
In the Canadian Yukon Territory, there were 1,400 glaciers surveyed in 1958. From 1958 to 2008, only four of those 1,400 glaciers got bigger, over 300 disappeared, and the rest got significantly smaller. The Extreme Ice Survey, the brainchild of Balog, is pure and empirical evidence that we know what is going on with glaciers. It is not just an issue with economic and public policy, but with perception, because the public still does not yet understand climate change. We must change the lens through which we view topics of climate change; that is, with an unbiased eye that sees the reality of our destructive habits. 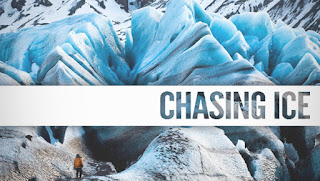