On the morning of July 31, 2014, I gathered with about 25 people of faith representing different traditions and denominations in front of the Moorhead Building in Pittsburgh where the EPA was holding hearings about their new proposed carbon reduction rule for coal-fired electricity plants.

Led by Rev. Paul Lubold, Advocacy Developer for Lutheran Advocacy Ministries of PA (LAMPa), we prayed, invoked the Four Directions (in the spirit of our First Nation friends), lamented the desecration of God’s created world, read inspiring passages about healing and protecting God’s Creation, and held hands singing a chorus of “Amen.”  All the while, the busy world of car and truck traffic, foot traffic and the hectic life of the city during the morning rush seemed oblivious to what we were doing.  But we were creating sacred space, lifting up the EPA officials who would listen to our testimonies, and praying for all those who would testify both for and against the rule.

At 9:30 a.m. I gave my testimony (read the full version here).  Before and after, I heard others testifying in favor of the rule, including a scientist, a nun, environmental activists, a teenage boy, a farmer, and two individuals who spoke passionately about the effects of carbon pollution on African Americans and other minorities.  Nikki Silvestri of Green for All noted that 68% of African Americans live within 30 miles of a coal plant and bear the cost through debilitating lung diseases and poor health.  She gave the encouraging news that according to recent polls, minority populations are paying more attention to environmental issues and becoming involved in seeking practical solutions.

At 11:00, a rally for clean-air advocates was held, after which we made our way down to the street where miners and boilerplate makers where marching to protest the rule, yelling that it would take away their jobs.  The scene was tense and confrontational.  As I watched the camouflaged-shirted men (and some of their wives) moving through the street, listening to the two groups yelling at the top of their lungs, the distressing nature of the scene was not lost on me. 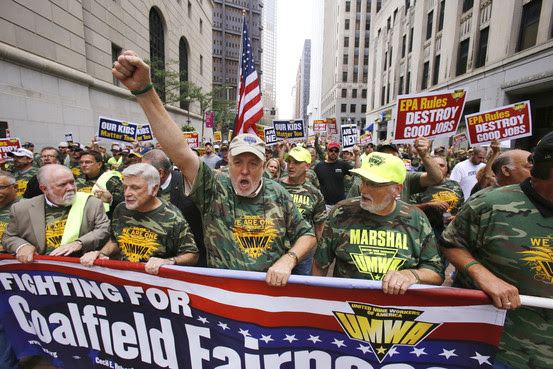 These miners – these could be my parishioners – hard-working, family-loving men with strong faith and solid values.  Yet here we were, yelling at each other across a divide that doesn’t really exist.  They care about their children, and so do clean-air activists.  They want to be able to provide for their families, and so do we.  We are not their enemy.  What they don’t realize is that we are actually on their side.  We want them to have good paying jobs that will not require them to sacrifice their health and the land around them that is sacred to all of us.

At the clean-air rally just a few minutes before the protests, we listened to a single mother from West Virginia who came from three generations of miners.  She watched her grandfather, father and many family members lose their health and ultimately their lives to the mines, lung disease, and injuries.  She shared with us how much pride her family had in their occupation as coal miners.  But one day it finally hit her – it’s not acceptable that the powering of America should require the sacrifice of her family, of America’s men who work in the mines.

We also heard from a fifth generation Iowa farmer who admitted that farmers have been “late to the game” in combating climate change.  He noted that although many of his peers deny humankind’s culpability for climate change, they all know that something is seriously wrong when their farms go from extremes of too much rainfall in one month to drought conditions the next, with seasonal temperature disruptions that are affecting all of them. Something has to be done, he said, and we can do it. American ingenuity can tackle this problem.

Another speaker echoed the farmer’s words and said that he refused to believe the lie that converting to energy efficiency and renewables will send our energy costs higher and result in economic shut-down and loss of jobs.  We are better than that, we’re smarter than that, he said, to the enthusiastic cheers of the crowd.

Perhaps the speaker that gave me the most hope was from the BlueGreen Alliance, which, according to their website, “unites 15 of our country’s largest unions and environmental organizations. Acting together, through nearly 16 million members and supporters, we are a powerful voice for building a cleaner, fairer and more competitive American economy.”  This is the kind of unity of purpose we need to see more of, now more than ever.

How I wished, as I watched the miners and union workers screaming at us, that we could sit down together, talk and listen to each other.  As the prophet Isaiah spoke, “Come now, and let us reason together, says the Lord: though your sins be as scarlet, they shall be as white as snow; though they be red like crimson, they shall be as wool. If you will be willing and obedient, you shall eat the good of the land: but if you refuse and rebel, you shall be devoured with the sword: for the mouth of the Lord has spoken it.” (Isaiah 1:18-20).

The Fossil Fuel Giants must have been tickled with glee that their workers were fighting their battle for them.  Why can’t they, like the mother from West Virginia, realize that they are simply throw-away parts in a machine that only creates the illusion of security through a dangerous job that will kill them and the planet which we all share?

The confrontation between our two groups took me by surprise, and I deeply regretted and was saddened by the hostile nature of the competing protests.  Had I known, I would have brought a different sign than the one I held about climate change.  I would have held a sign with a quote from the The Hunger Games: Catching Fire:
“Remember who the real enemy is.”
We are not your enemy.