[Beginning from the back of the congregation]. Let’s rewind back to the beginning of our service.  Everyone stand up and hold your palm branches.  We began our story at Bethphage which is a little town right on the outskirts of Jerusalem.  And what happens?  Jesus sends two disciples into the town on an errand.  He says to go into the town where they’ll find a donkey, which they are to untie and bring to him.  And sure enough, they return with a donkey, which Jesus sits on and rides into Jerusalem.

Now we’ve heard this story so many times in our lives that this does not seem out of the ordinary to us.  But to the people who gathered along the roadside to welcome Jesus into Jerusalem, this was a ridiculous sight.  They called him, “Son of David.”  This means they regarded him as the rightful heir of the throne of Israel.  They thought of him as a king.  They knew the stories about Jesus’ power - the healings, casting out demons, bravely confronting the Jewish religious authorities.  To them, this was the Messiah, the Anointed One whom they and all of Israel had been hoping for since the glory days when King David ruled over Israel and conquered the surrounding lands in the name of Yahweh.

But does their king come riding into Jerusalem on a chariot befitting someone of his stature?  No.  Does he ride a fabulously decorated horse and regally trot through the gate?  No.  He’s sitting on a donkey.  This would be the equivalent of the Queen of England straddling a tricycle and pedaling into London.

Wave your palms and shout, Hosanna to the Son of David! (ride tricycle down the aisle).  Wasn’t that ridiculous? 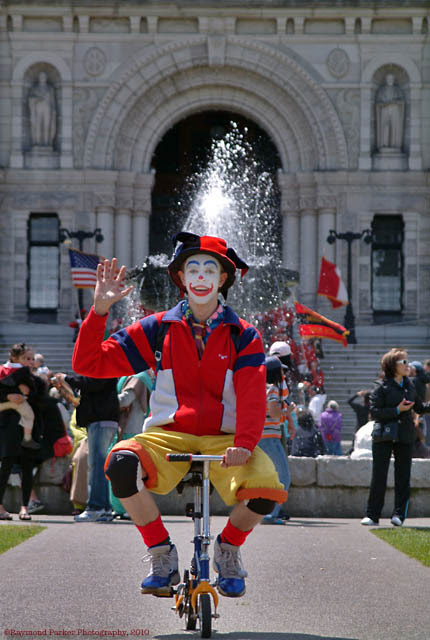 (You can have a seat now.) Or think of President Obama making a triumphant trip into Washington DC.  How does the president get from country to country?  Air Force One - his own private military jet.  And how does he get to the Capital?  He rides in an armored limo surrounded by an armored motorcade that whisks him through the city.

Now imagine if, instead of this stately motorcade, Barack Obama was riding in one of those little clown cars. All political jokes aside, this would be a comical sight, wouldn’t it?

The humor in this situation would not have been lost on the crowds gathered along the roadside.  In fact, they might have been a little put off by what they saw.  What does he think he’s doing, riding a donkey into Jerusalem?  This is not befitting the king of Israel.  What’s going on here?

There they are, spreading their cloaks and palm branches in front of him.  This is their way of indicating how highly they regard Jesus.  It would be like laying out the red carpet at the Oscars only to have the movie star walk in wearing muddy boots and work clothes.  They are throwing down their cloaks and palms for this man they adore and he’s acting like a commoner.  Jesus is actually poking fun at himself, satirizing the pedestal upon which they are trying to place him.

The crowds seem oblivious to the joke.  Undeterred by the comic discrepancy, they begin shouting, “Hosanna to the Son of David!  Blessed is the one who comes in the name of the Lord!  Hosanna in the highest heaven!”  Do you know what the word “hosanna” means?  It means, “save us, we pray.”  They are expecting Jesus to whip them into a frenzy of violent revolutionary upheaval, and to use his demonstrated power to wreak havoc upon the Roman military, drive the oppressor from their holy land, and go on to conquer the world in the name of Yahweh - just like King David.  But instead, Jesus is riding around on the equivalent of a tricycle.  What’s going on here? 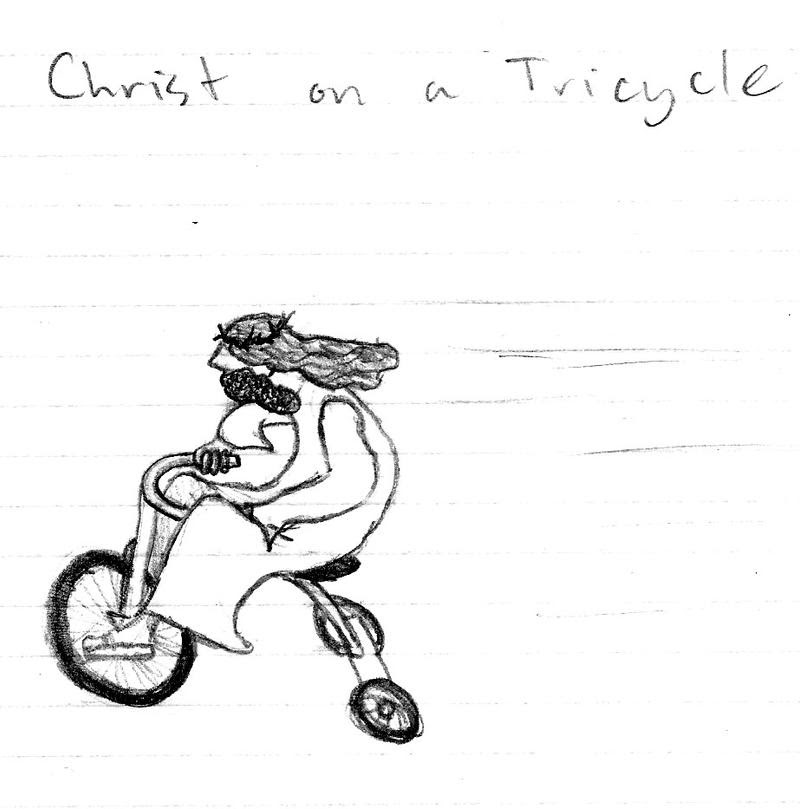 Jesus is trying to open their eyes.  A few weeks ago, Jesus opened the eyes of a man born blind.  Today he’s doing the same thing.  He’s trying to get the crowds to see something that they are blind to.  What is it that they are supposed to see?

According to the Jewish calendar, Jesus arrived in Jerusalem on the 10th day of the month of Nisan prior to the Passover.  “The 10th of Nisan was the day on which the Passover lamb was selected.  On this day Jesus symbolically presented himself to the people as Messiah intent on being the Passover Lamb,” (Horton, p. 437).  What Jesus is trying to get them to see is that he is not the Messiah they want him to be.  Jesus is not going to exercise his power through violence.

Biblical scholar Stanley Horton explains:  “Jesus’ actions showed that he is not a king of violent or political force; rather he is a humble king, offering salvation and ruling with peace.  The Messiah foretold by the prophets was a direct contradiction to the popular expectations . . . In contrast to earthly kings who used horses, chariots and other symbols of war to show their might, this King distinguished himself by riding upon a donkey.  Donkeys were not used for warfare.  They were a simple beast of burden, used by the common person for transportation and carrying loads during times of peace.” (Horton, 439, 441.)

Let me be clear here.  Jesus is not rejecting power, but only its use to dominate others.  He is not rejecting greatness, but is showing how it is to be used to be in solidarity with the needy at the bottom of society (Wink, 111).  He is trying to open everyone’s eyes to a different way to exercise power.  And the way he’s doing it is through humor, self-deprecation, and symbolism that is in accordance with ancient prophecy.  His donkey ride on Palm Sunday is at once comic and tragic, meant to jar us with its contrasts, and open our eyes to see things in a different way.

As I think of this man on a donkey, I think of other images that have entered into our modern consciousness that have shaken us up and gotten us to think in a different way.  The picture from the 60’s of the war protester putting a flower into the barrel of a soldier’s rifle.

It is at once comic and jarring in its contrast of military power versus idealistic peace.  A flower is no match for a gun!  Exactly.

The picture from the 80’s of that lone student in Tienamen Square facing the phalanx of army tanks.

It is at once comic and tragic in its portrayal of human rights versus military might.  A single unarmed man is no match for a powerful army.  Exactly.

And then I think of the story of Ashley Smith, a woman who was tied up in her apartment by an armed rapist and murderer.  She talked to him gently about God, family and pancakes, until he released her, and then gave himself up to authorities peacefully.  It’s at once laughable and terrifying.  A single unarmed woman is no match for a muscular criminal holding a gun to her head.  Exactly.

And yet what happened in all of these instances?

The power of nonviolence seeped into the consciousness of domination and began to turn the tide.  The images and stories are so powerful that they become icons for what is possible when we begin to see things in a different way.

Later, after Ashley Smith was released unharmed, one of the police officers said, “It was an absolutely best-case scenario that happened, a complete opposite of what you expected to happen.  We were prepared for the worst and got the best.”

We are prepared for the worst, aren’t we?  We know what we’re heading into this week.   Jesus’ commitment to nonviolence will, ironically, lead to his most violent death.  A single unarmed man is no match for the government and the religious establishment; a single man hanging on a cross is no match for the power of death.  Exactly.

And yet, what is happening here?  Jesus is determined to open the eyes of someone -- even if it is just a few blind men and women along the way.  Even if it’s just your eyes that become open.  He wants people to see that having power does not give one the right to lord it over others by means of wealth, shaming or violence.  Power is not to be used to grab all you can and then do anything you can to protect what you’ve got.

Jesus is giving us another way to see power.  And how are we supposed to see it?  No one says it better than Paul:  “Let the same mind be in you that was in Christ Jesus, who though he was in the form of God, did not regard equality with God as something to be exploited, but emptied himself, taking the form of a slave, being born in human likeness.  And being found in human form, he humbled himself, and became obedient to the point of death - even death on a cross.  Therefore God also highly exalted him and gave him the name that is above every name, so that at the name of Jesus every knee should bend, in heaven and on earth and under the earth, and every tongue should confess that Jesus Christ is Lord, to the glory of God the Father.”

“Crown Him With Many Crowns,” we’ll sing in a moment.  But how can we crown a king who wants no crown or throne, and wants to ride around on a silly donkey?  We can do the same thing the crowds did thousands of years ago.  We can take our palms and say,
“Hosanna” -- save us, we pray.  Save us from ourselves.  Save us from our blindness.  Open our eyes.  Let us see the truth.  Let us see how you want us to enact power in this world in God’s name.

And then with this prayer on our lips, we can have faith in our hearts that even while the world around us is preparing for the worst . . . we know that we can expect the best.  Amen.