Watch the video of this sermon here: https://www.youtube.com/watch?v=jgymtARc3aU 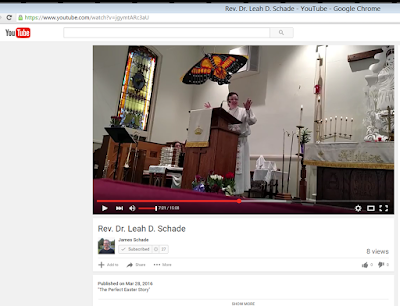 The conventional wisdom among preachers is that you need a big story on Easter Sunday to match the power and grandeur of this highest of high holy days.  You need a sermon that is going to include a testimony or a narrative that will make people say, “Wow!  Hallelujah!  Christ is risen, he is risen indeed!” You want people walking out into the light of the Easter morning after the service filled with the memory of that sermon that has reached the peak of homiletic perfection.

So I’ve been racking my brain for weeks trying to find the perfect Easter story.  I’ve been keeping my preacher’s antenna out for just the right story with the right combination of pathos and humor, heart-warming and soul-inspiring.  I thought about recounting the true story from the movie Miracles from Heaven, about a little girl who is miraculously cured of a digestive disorder after she survives a devastating fall from a tree that should have killed her.  Somehow while she is unconscious, she encounters Jesus, and he tells her she is going to be fine. And she wakes up completely healed.  A perfect Easter story!

Or I thought about the interview I heard with a woman who was caught in the bombing of the airport in Brussels, Belgium.  She admitted that she was terrified and spent the first moments in the aftermath hiding under a table.  “Frankly, I was a coward,” she said.  But she saw two little girls injured and in need of care and attention.  So she went to them, singing songs to them, saying the Lord’s Prayer with them until medical help could arrive.  Right there, in the midst of hell on earth, the Spirit of God found its way into the smoke and rubble, singing through her tremulous voice.  Another perfect Easter story!

But then I went to the Good Friday breakfast held for John Sheaffer by the Mifflinburg Kiwanis, and I thought about the miracle we have in our own congregation.  A man whose heart simply stopped for no reason that could be explained.  And only by the steadfastness of his friend Louis’ CPR, and the miracles of modern medicine, and I daresay the prayers of this congregation and the hundreds if not thousands of people who lifted him up in prayer, only by the grace of God is he alive today.  I remember standing at Williamsport Hospital, looking out the window and thinking we’re going to lose him, to a week or two later walking into his hospital room and hearing him asking me how the congregational meeting went.  I felt like I had a glimpse of the resurrection.  That’s a perfect Easter story.

But then I thought about Devon and Jindrah Kemper, who should have died in that horrific accident.  But, again, through the power of prayer and modern medicine, and Devon’s stubborn, ornery will – the two of them are alive, and Devon is just as stubborn and ornery as ever (and I'm sure he would agree with me on that!)  Another perfect Easter story.

And then there’s Jeff Snyder, whose was working in the barn when the floor collapsed.  Had he landed the wrong way, it could have ended his life.  But by some miracle, his foot and ankle caught the worst of it, and he knows he got a second chance – and he’s using it to serve in any way he can.  Another perfect Easter story.

I’ve never heard of a congregation with this many miracles right in their own pews!

But even when the tragedies have come, the risen Christ still finds a way into our midst.  I have conducted sixteen funerals in the nearly five years I have been here at United in Christ.  From the very first one – Rich Hoover – to the most recent one – Bill Harvey – I have witnessed resurrection moments where even in the midst of death, the legacy of that person is kept alive through the faith of the people of this church.

A scholarship fund was started in Rich’s memory.  And now Felicia Swartz, who has benefited from the generosity of that fund, is starting her final internship this summer and will someday become a fine pastor.  That’s a perfect Easter story.

Rich Huff, our beloved resident jolly Santa Claus, died four years ago after complications from a house fire.  But the people of this church have kept his spirit of generosity alive by establishing the Operation Santa Claus fundraiser that has helped so many children in need in our area, and has become an event of community collaboration every year.  That’s a perfect Easter story.

And think of all the children and grandchildren who are the legacy of people like Pauline Hauck and David Tanner, Sam and Bea Rice, Leanne Byerly, Dorothy Strassner.  For their families, faith does not end just because a life comes to an end.  What their children and grandchildren and great-grandchildren learned from their life and their witness and their faith in this resurrected Jesus Christ is that no matter what happens, you do like those women who watched their rabbi die on that cross.  When the body comes down, you go and prepare the spices, and then you show up at the tomb to do the most compassionate thing you can – anoint the body, caress the memory with the fragrance of love.  You show up, and you keep going, no matter how bad it gets.  And one way or another, the risen Christ always finds a way into our midst.

What amazes me about this congregation is that no matter what happens, you never give up.  You keep showing up.  And somehow, as you’re doing the simple task of hauling yourself up in the morning to give it one more go, you find yourself standing next to the women at the tomb, amazed that something has happened, something you did not anticipate, something that has changed everything.

Frankly, I’ve never encountered a church that has endured as much as this one has.  From the legendary origin story of this church splitting with the one across the street after a conflict among the members; to pastors who have divided and split this congregation; to a massive wind shear blowing down through the valley and splitting the church roof from the frame, peeling it back like a can of sardines.  This congregation is no stranger to splits and conflict and tension and one darn building problem after another.  Why just in the last year we’ve had to contend with the floor sinking in the fellowship hall to the roof leaking right up there in the ceiling.

And yet time and time again, when it looks like the church may be on the verge of collapse, when many had probably written it off as dead in the tomb, always the people show up to carry on.  Like those women on an early morning at a cemetery in Jerusalem, the porcelain blue light of the pre-dawn sky coaxing them through the shadows of the tombs.  They had come to do the task that had to be done – to anoint Jesus’ body.  But when they show up, there is no body – only two men in dazzling clothes who give them news they cannot even comprehend.  The idea that Jesus is actually risen from the dead is so far beyond our thinking, that not even the disciples believe it when the women run to tell them.  Oh it’s just those hysterical, grief-stricken women.  Just telling old wives tales.

But it’s not a tall tale.  It’s not just some fantasy story made up to make us feel better about what happened.  The resurrection happened!  It really happened.  And in the days and weeks ahead they will come to realize that yes, it’s true.  The risen Christ is in their midst, and the world has changed forever.

You can go to Brussels to find the risen Christ.  And you can go to the movies and see inspiring stories of little girls and little boys who saw Jesus coming to them after crossing over death’s door, and coming back to tell their story.

But you can also find empty tombs see the risen Christ right here in your own church, right here in the pew next to you or behind or in front of you. 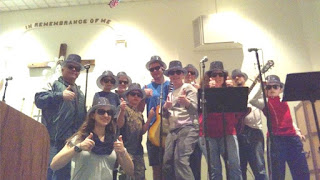 Keep showing up.  Keep doing the right thing.  Never doubt that God is in your midst creating a resurrection moment, even if you can’t see it at first.

And if this is your first time here, or you only come here once or twice a year, I would urge you to come back more often to see what God is doing in this place.

Because, let me tell you, United in Christ is a resurrection congregation.  Never doubt that.  No matter what has happened in the past, no matter what may come your way in the future . . . God wants this church to be here and to carry on, and to tell the perfect Easter story.