If a picture is worth a thousand words, than a metaphor is worth a thousand feelings and connections.  The Bible is replete with images that not only spoke to the original hearers, but also speak to us, Many generations removed.  This imagery of new growth arising out of the stump was so powerful for the people in Isaiah’s time.  Their history was marked with periods of utter devastation, sometimes at the hands of their enemies, but other times through their own failure to enact justice for those most vulnerable in their own community.
We, too, can resonate with the loss God feels for this vineyard that had been Israel – “he expected justice, but saw bloodshed; righteousness, but heard a cry!”  And how anguished those cries have been this past month across our world, as we saw story after story of bloodshed in Baghdad, Beirut, Paris.  And here in the United States where we have had more mass shootings than days of the year in 2015.  And in refugee camps and walking trails across the globe where thousands are fleeing for their lives, trying to find safety in a place that will welcome them, rather than shutting them out.
“O Come, O Branch of Jesse, free your own from Satan’s tyranny,” we sang in the opening hymn.  What does this mean – Branch of Jesse?  It comes from this passage in Isaiah: “A shoot shall come out from the stump of Jesse, and a branch shall grow out of his roots.”  Jesse was the ancestor of David, the great king of Israel.  At the time when Isaiah was writing these words, it appeared that the line of kingship had been cut to the stump, along with the rest of the nation of Israel.  They were existing on bare bones, with little hope, and not many prospects for a better future.
I came upon a stump earlier this summer. 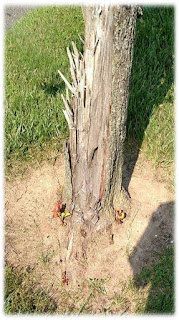 It was a tree that had been ripped down by a storm.  All that was left was this stump.

But that was not the end of the tree.  A new branch began growing out of the stump. 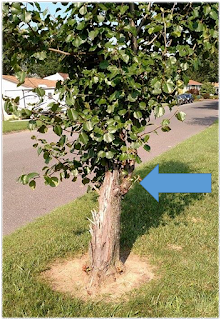 And today, this is the tree that has grown just as tall as the other trees around it. 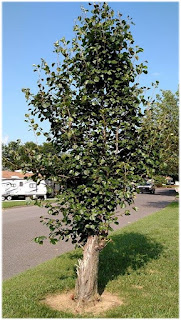 I have to admit – I passed by this tree for years and never really took notice of its trunk, what had happened to it.  But one day as I was walking past it, something made me stop and notice the raggedness of the trunk.  And as I took a closer look, I realized what had happened to it.  This tree had once been just a stump.  But look at it now.
An image like this, like the one we have in Isaiah, is so important – because it ignites our theological imagination.  Theological imagination is the capacity to see the world as God would have us see it, to see people and communities and our planet as God sees them.  A metaphor like a new tree rising from the stump gives us access to a regenerative theological imagination and helps us to see a God-directed future.

“Theological imagination?” you might ask.  What good is that going to do for us when we’re just struggling to make ends meet?  When we’re facing a rising tide of racism, gun violence and terrorism around the country and around the block?  When the doctor puts her hand on my shoulder and gives me the news I was not prepared to hear?  How is theological imagination going to help us – help me – then?
But you see, lack of imagination is precisely the problem.  When we refuse to see our fellow human beings as children of God, when we cannot see beyond a person’s gender, or skin color or sexual orientation, or immigration status, or police record – it is a failure of imagination.  When we can no longer imagine any solution for our conflicts that does not involve guns or bombs – that is a failure of imagination.  When we cannot see any alternatives for our economy, and our ecology, and our agriculture in order to create a more just way of life for people and our planet – that is the failure of imagination.  When the news about our health, or that of a loved one, leaves us so distraught, we can barely get out of bed in the morning – a healthy dose of theological imagination can go a long way.

I have seen this happen for one of our own in this congregation.  One of our members has learned first-hand what it means to be cut down and be left with a stump.  The virus or bacteria or whatever it was that struck his heart and eventually led to loss of circulation in his leg has left him with one less limb.  I can only imagine the pain he is experiencing, the sense of loss, and the sinking feeling of knowing that his life is changed forever.  But he and his wife have told me that what has gotten them through, in addition to the medical care he has received – has been the love and prayers and support of their family, friends, and this congregation.  Soon he will be learning to grow a new life out of that stump, and it will take all of us to help him, encourage him, and lift him up in prayer.

And that, my friends, is why you are here.  It’s why this church exists.  When you look back on the history of this church, you can see the ways in which theological imagination sustained the members of this congregation through very difficult and trying times.  And given what we face now in a time that is reminiscent of the exile the Israelites experienced – this is precisely the reason why theological imagination is so important.  This community, this synod, this area of Central Pennsylvania, this world needs your imagination.  And this church, United in Christ, is the place where you can cultivate just that – a vineyard with new growth emerging from what appears to be nothing but dead stumps.  This is the place where you can encounter God’s Word and feel its power to open up new possibilities of creativity for your life and your community.  This is the place where you are invited to dream of ways to reach out to your neighbors, offer hope and encouragement, work for justice, and sustain the communities around you with saplings of faith.
Remember, Israel had been cut down to the stump by the hands of those who sought their demise.  By all counts, they were done for.  But Isaiah was looking at that stump through the eyes of theological imagination and saw a connection between human spiritual and societal health and God’s Creation. That which was written off as hopeless is what actually contains the seed for new life.

Slowly, much more slowly than I’m sure they would have liked, Zion emerged as the people who would be strong. And where does that strength come from? On the back of a suffering servant figure.  While Israel did not envision such a root coming in the form of Jesus, as Christians, we can’t help but see the similarity in the life, death and resurrection of Christ.  This means that our hope, our strength, our renewal comes through Jesus – who is, by the way, a descendant of David’s line – a branch of Jesse.

Now, of course, just because there is new hope does not mean that the angels will swoop down with a chorus of hallelujahs, and the heavens suddenly open up with rainbows and sunbeams.  If you read to the end of Isaiah, you see that he does not allow the reader to arrive at a simple solution. We can’t just expect God to come and clean up our messes and make a happily-ever-ending for us.  We will have to be honest about the wrongs that have been done, to be forthright about the injustices people have suffered.  And when we do discover this new growth, it will require patience and nurturing and protection.  You will not be able to make it grow faster than it will.  But you can be assured – it will grow.  And it is our theological imagination that enables that growth to flourish. 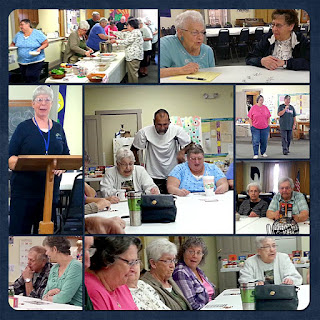 It is theological imagination that sparked the idea for our monthly senior center – OAKs.  We now have 50 people who have come to our program on the second Wednesday of the month.  Our society often looks at seniors as nothing but cut-off stumps, past their prime.  But this church said, wait a minute.  The seniors of this community are still Children of God.  They deserve a place where they can gather, talk with old friends and meet new ones, share memories, laugh with each other, share prayers and tears with each other, learn together, and grow, yes grow, in their faith.  A program like this helps people see that we need to value our senior citizens.  When I look at the folks who come to OAKs, I see saplings rising up out of the ground.  And it’s because this church remembers them and takes action. 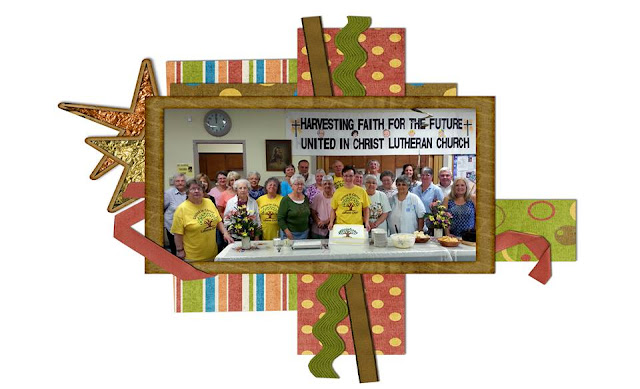 This image of the saplings sprouting up out of stumps captures so well the spirit of this verse in Isaiah.  It activates our theological imagination to remind us of God’s promise that no matter how terrible the tragedy, not matter how difficult the problem, no matter how heavy the burden, no matter how long it takes - suffering is not the entire picture.  God will persist in helping us overcome the obstacles that prevent us from living the full, productive, peaceful, healthy lives that we were meant to enjoy – individually, as a family of faith, as a community, as a nation, and as a human community on this planet.
United in Christ – you are that sapling.  You are a sign of hope for a weary world.  You are the bearer of Christ’s branch, rising out of the stump of Jesse, bringing new life to your members, to your community, and to this world.  During this Advent season, may God give you each the gift of this theological imagination to see new growth from old stumps.  To see a future for this church that is reaching up and out, tenderly and tenaciously.  To see Christ’s hands reaching, beckoning us into this new future with confidence, patience, and quiet, unremitting joy.  Amen.

More ideas for sermons about the Creation-Crisis can be found in my book:
Creation-Crisis Preaching:  Ecology, Theology, and the Pulpit (Chalice Press, 2015).
And visit the website for more ideas for connecting faith and Creation:
http://www.creationcrisispreaching.com/ 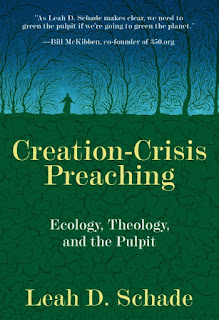