I am Ruah: a sermon on climate disruption preached from the perspective of the Holy Spirit

Watch the video of this sermon here:  https://www.youtube.com/watch?v=11hr-lGbD4k

I am all the air there ever was. I am ruah, pneuma, the breath of God. I am the wind of memory.
You cannot see me, but you know I exist because you can feel me, see what I do, listen for me. You know me as the Holy Spirit. I issued forth from God from before the beginning. I moved over the waters of Creation, as gases and hot steam from volcanoes bursting on this young planet. In the oceans God formed the tiniest bacteria – the beginning of organic life! They took in my carbon dioxide and released my oxygen which flew across the waters and lands, so that I hovered over this planet as a mother bird flutters over her nest egg. And what a beautiful orb God had created – swirling blues, soft white snows, and solid greens and browns.

You, too, Human, are part of that sacred exchange. God blew me, the exhalation of the plants, into your lungs as you emerged from the warm, wet womb. Earthling – you are adamah, the one whom God formed from Earth and blew into your nostrils the breath of life. I know every cell of your body, and I carry the memories of all other cells through which I have passed.

This oxygen-carbon-dioxide interchange takes place at the very basic level of your body. Your lungs are like trees through which these sacred gases are exchanged. Your blood is like Earth’s water where the mystery of life courses in an endless cycle of give-and-take. The air you inhale was once exhaled by the brontosaurus. The air you exhale will one day be inhaled by your sons and daughters living far across the globe. I am all the air there ever was and will be. I am Ruah. I am the wind of memory.

Before your kind emerged on the orb, that brontosaurus roamed a planet thick with vegetation and teeming with other massive thundering lizards of all kinds – flying and scampering, red-toothed and thick-muscled, scaled and spiny. For 165 million years they flourished. Until the days when the great fire rained from the sky, 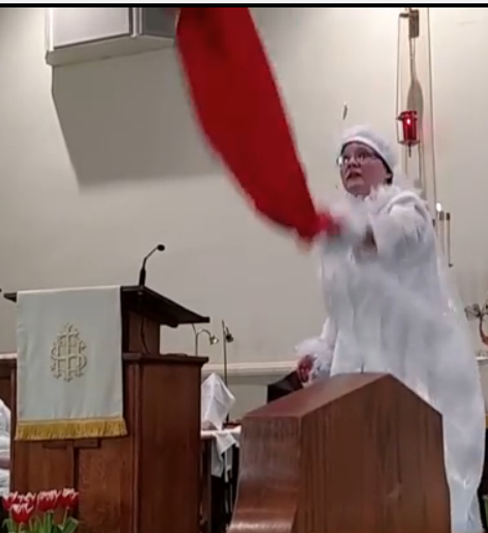 and I burned and smoked, extinguishing the lives of so many, their bodies falling into the mud of all the dying vegetation. I grieved at the loss of so much life, all the cells I had nurtured, all the greenery I had caused to flourish, now sinking into the depths of time and the stony grip of mountains and riverbeds, beneath ice sheets and vast stretches of flat lands. But God assured me that life would arise again, with even greater variety and texture.

I am Ruah, and I carry the memory of the great turning. Together over many millions of years we coaxed the sacred exchange to renew itself again. Little by little, life returned to the planet in colors of all shapes and forms – growing, swimming, flying, galloping. This time I learned to sing! In the whistle of the warbler. In the sonorous bellows of the deep-diving whale. And in your own voice! I, Ruah, God’s breath, sing through you! (sung) “Sing to the Lord a new song.” Take me into your lungs and sing with me: “Sing to the Lord a new song. Earth contains marvelous things! I too will praise God with a new song!”

Beautiful! The same singing I heard from Miriam after I blew across the Sea of Reeds and allowed the captive Israelites to walk to freedom on dry ground. The same song I heard from Mary when she opened herself to me and God formed the tiniest zygote in her womb – the one who would become Jesus. In Mary another great Turning had begun, and her song inspired her Son. He would sing her song with the women and fishermen and tax collectors when they would gather to break bread on the Sabbath. Oh yes, Jesus loved to sing! He would take me into his lungs and burst into song for any reason at all, or for no reason at all.

I hovered over him as he emerged from the baptismal waters. I filled his lungs and issued forth from him in his words, his vocal cords vibrating with the teachings, his whispers of healing, his exhaled exhortations. But just as he was breathing into the world new life and new hope, others were using me to conspire against him. They breathed threats against him, hissed their plans for his demise.
But Jesus did not cower in fear before them. He warned them: “Therefore I tell you, people will be forgiven for every sin and blasphemy, but blasphemy against the Spirit will not be forgiven. Whoever speaks a word against the Son of Man will be forgiven, but whoever speaks against the Holy Spirit will not be forgiven, either in this age or in the age to come.”

I am Ruah. I am all the air there ever was. I carry the memory of his final hours. With each gasp as he hung from the crude scaffold of crossed planks, my power grew weaker. The weight of his body crushed his lungs, forcing me from his body. The carbon dioxide overwhelmed the balance, causing a cascading effect in his blood, his brain, his heart. He used his last bit of air for prayer, and then exhaled for the final time. 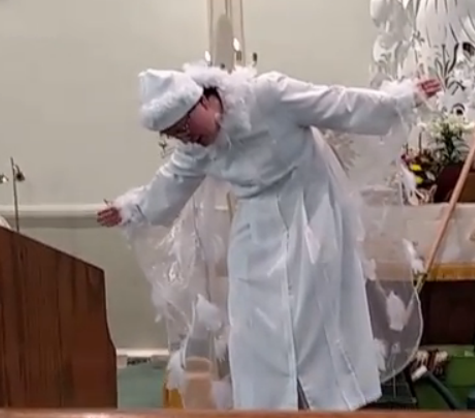 I grieved at the loss of this life, all the cells I had nurtured, all the hope I had caused to flourish, now sinking into the depths of time and the stony grip of the tomb. But God assured me that life would arise again, with even greater power and energy.

I am Ruah. I carry the memory of that great Turning. Three days later, God blew me into his nostrils, this adamah, this Divine Earthling, filling his lungs, coursing through his newly pulsing veins and arteries. In his lungs the sacred exchange of oxygen and carbon dioxide lifted him up, raised him from death. He arose from the heart of the earth with power – my power, the power of the Holy Spirit. And in that upper room he breathed me onto those women and fishermen and tax collectors: “Receive the Holy Spirit.” And then he sent me to them as his own power. On the day of Pentecost I blew into that upper room, lit the holy fires above each of them. They could not see me, but they knew I existed. They could feel me, see what I did, listen for me speaking through them. I am Ruah. I carry the memory of their power which God has exhaled into you, Earthlings who are baptized with water and the Holy Spirit. I filled your lungs and issued forth from you in your words that echoed his teachings, his healing, his exhaled exhortations. You were breathing new life, new hope into the world. In you the sacred exchange was happening – you were the lungs of the Body of Christ!

But others were using me to conspire against you, against him, against all life on this precious orb. You remember those dinosaurs and plants from those many millions of years before? The carbon from those fossilized forms had been locked away, safely buried beneath millennia of gravity and pressurized stone. The sacred exchange in the land and air above continued undisturbed as life unfolded, diversified, flourished across the face of the orb. But then your kind learned to unlock the heat within the stone, to dig deep for the black oily remains, to fracture the rock and release the gases held safely miles beneath the surface.

As your kind swarmed the globe, the sacred balance began to tilt. You tore the trees – the planet’s lungs – from forests and jungles. I hovered like a death-bird over the planet.  The carbon dioxide and methane overwhelmed the oxygen, trapping heat and causing Earth’s fever to rise. This was blasphemy against the Spirit – the unforgivable sin. For if the very essence of life, God’s breath, Ruah, is destroyed, there can be no breath, no life for anyone or anything. It is unforgivable because there is no return. Once the balance tips too far, the cascading effect on the oceans, the ice sheets, the mountains, and the climate cycles falls too fast to stop. 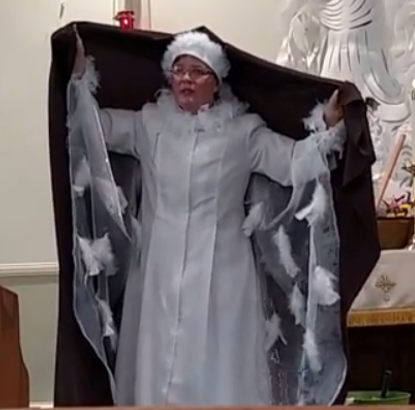 I am Ruah. I am all the air there ever was. With each final gasp of the last of each species, my power grew weaker. The weight of the concrete and steel crushed Earth’s lungs, forced me from so many bodies. I grieved the loss of so much life, all the cells I had nurtured, all the hope I had caused to flourish, choked by the fumes from the stony grip of those fossilized remains. I was suffocating with fear. 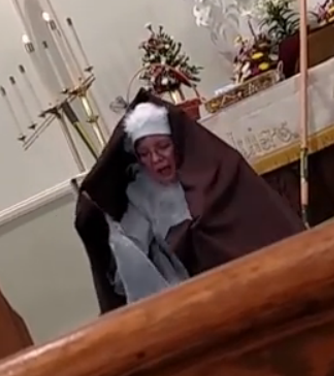 But God assured me that life would arise again, with even greater power.

I am Ruah. I carry the memory of those fateful years. And I carry the memory of the Great Turning. God filled the lungs of the remaining singers and they sang the song of Miriam, of Mary, of Jesus. They were filled with the Holy Spirit and used their air for prayer, lifting their voices in songs of protest and peace. They called for the burning to stop, for the sacred remains of the brontosaurus and her kin to remain in their burial grounds safely in the heart of the Earth. They called for the balance to be restored. They breathed in together as they marched, as they testified, as they taught and healed and spoke words of exhortation: Do not blaspheme the Holy Spirit. Use this power for life, for hope, for peace. They learned to draw upon Sun and Ocean, Earth and me – the Wind – to generate their power and restore the sacred balance.

I am Ruah. I am all the air there ever was. I am pneuma, the breath of God. I am the wind of memory. You cannot see me, but you know I exist because you can feel me, see what I do, listen for me. I am the Holy Spirit, and you are part of the sacred exchange, the Great Turning. I know every cell of your body, and I carry the memories of all other cells through which I have passed. I am carrying your memories to your daughters and sons who will breathe the air your exhale.

(sung): Sing to the Lord a new song. Earth contains marvelous things! I too will praise God with a new song! 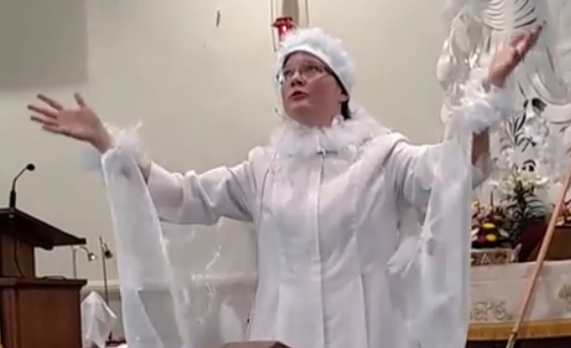 (Note: This sermon is the third in a trilogy of sermons.  The first, Earth Speaks, and second, I am Water, as well as other environmentally-themed sermons can be found in my book Creation-Crisis Preaching: Ecology, Theology and the Pulpit [Chalice Press, 2015].)