“But how can I protect the world if I can’t kill anybody?”

Last night our family watched The Boy in the Striped Pajamas, a film with the brilliant young actor Asa Butterfield who plays the 8-year-old son of a Nazi commandant assigned as the director of a German concentration camp. 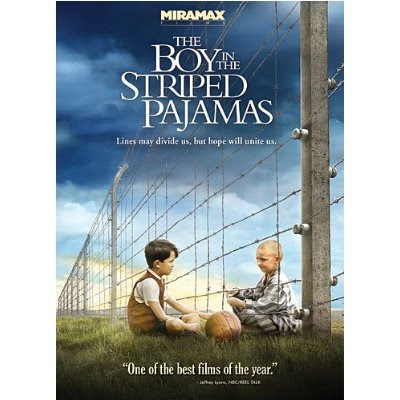 He moves his wife, daughter and son with him to a heavily guarded house in the woods beyond the camp.  The son, Bruno, sees the camp from his window and thinks that it’s a farm, wondering why the farmers all wear striped pajamas.  Bored without any playmates, Bruno sneaks out of the guarded compound to explore the woods.  He comes to the far side of the camp, surrounded by electrified barbed wire, and sees a boy wearing striped pajamas crouching behind a pile of rubbish.  The boy is Schmuel, and the two strike up a conversation and form a friendship through the wire.

Bruno hears his father, mother, sister and tutor repeat the “party line” about the evil of “the Jew,” the crimes Jews commit, how they are less than human, and are responsible for the ruination of the German people.  He cannot reconcile this propaganda with the Jewish man he comes to know who works in their kitchen and heals his injured knee after a fall.  His confusion is further compounded by the friendship he has with Schmuel.

“But not all Jews are bad are they?” Bruno asks his tutor.  “Well, if you should find a good Jew, I should think you are the greatest explorer in the world,” the tutor winks.

Without spoiling the ending of the movie, I will say that, given the foul smoke that floats over the compound periodically, it is not surprising that the movie ends with death.  Who dies and how it occurs are particularly gut-wrenching and heartbreaking.  My children melted in tears at the end of the movie.  My son, especially, had incredible difficulty accepting not only the ending of the movie, but the fact that it was a “true story,” in that the Holocaust did indeed happen, and that approximately 6 million Jews and other “undesireables” were murdered.

It was the conversation with my son at bedtime that was most disconcerting, however.  Benjamin is seven, and an avid lover of superheroes.  I try ardently to limit his screen time, boundary his “fighting games” on the computer to one day a week, and ban all toy guns from the house.  But he insists that he must learn to fight so he can “kill the bad guys and protect the good guys.”

Here is an excerpt of our dialogue after the movie:

Ben: See that’s why I have to be a superhero so I can kill the bad guys like the Nazis.

Mom: But how will you know who is really a bad guy?  Remember in the movie they kept telling Bruno that Jews were the bad guys . . . but were they really?

Ben: No.  But that’s why I will have my Spidey-sense so I can tell who the bad guys are.

Mom:  But remember, Spiderman is fiction.  The Holocaust really happened.  There weren’t any superheroes in this movie were there?

Mom:  Well, actually, you know who the superhero was?  Bruno.  He helped Schmuel by bringing him food and being his friend.  That’s what Jesus tells us to do – help those who are in need.

Ben:  But the Nazis killed all those people!  I have to be a superhero so I can kill the bad people.

Mom:  But remember what Jesus said.  Those who live by the sword die by the sword.  Killing people is not what we’re supposed to do.

Ben:  But how am I supposed to protect the world if I can’t kill people?

Mom:  Here’s what Jesus taught us.  As soon as you kill the bad person, you know what happens?  The badness comes into you.  Killing the bad person makes you a bad person too.  Remember what happened to Jesus – he was killed by the bad guys.  But did he kill them back?

Mom:  We have to work on helping people, not killing people.

What do you think, dear reader?  With all my reading of Walter Wink and Martin Luther King, Jr., John Howard Yoder and William Stringfellow, it all comes down to a 7-year-old wanting to protect the world and seeing the best option as using the very violence that threatens to consume him with its lures and lies.  Pax Romana.  Pax Benjamin?  Peace through violence.  How to help an elementary-aged concrete thinker growing up in a patriarchal culture awash in the myth of redemptive violence understand the nuances of peace through creative, subversive nonviolence? I invite your suggestions.
Posted by Unknown at 6:42 PM