Our cars pulled into the gravel parking lot facing the brick building across the street.  All around us were signs of a city that had fallen on hard times.  Buildings with shattered, darkened windows like black eyes looking out on a desolate, concrete world. Candy wrappers, Dorito bags, and all kinds of discarded trash skittered along the sidewalk whenever a car sped by.  We hurried across the street and into the building – City Team Ministries in Chester, PA, just south of Philadelphia.
Seven confirmation students, a few parents and I were there to learn about the work of this Christian-based haven for homeless and drug-addicted men.  Every evening City Team opens its doors to the community and serves a meal cooked up by the men with the assistance of volunteers from local churches.  The church I served at that time sent volunteers every fourth Monday of the month to conduct the worship service that preceded the meal, and to help serve those who came in need of good, hot food, a safe place to gather, and clothes or shoes for themselves and their families.  Once a year I would bring the Confirmation students and their parents to this place to help with the service and meal, tour the facility, and hear first-hand from men who battled the demons and temptations of addiction.

After serving the meal, we sat down in one of the common rooms with a man we’ll call Brian.  He was clean-cut, handsome, and looked not much older than the teens sitting uncomfortably in the plastic chairs around the table.  He did not look like a typical drug-addict.  But then he told us his story.

“At first I started using because I thought it would be fun. I was hangin’ out with my friends, and that’s what we did, you know?  I really didn’t think anything about it.  I thought I was strong enough to handle anything.  But I really had no idea, you know? That feeling it gives you, it takes hold of you and it’s all you can think about.  It just controlled everything about me.  It was everything I thought about, drove every action I took.
“I had so much going for me.  I came from a good family.  People liked me and I did well in school. But I knew how to get money.  And I knew how to make people believe things about me so that I could cover up what I was doing.  I thought I was so smart, you know?  But the demon – that’s what I call him – the demon is smarter than me.  I started stealing, selling bags to kids like you, getting mixed up with some seriously dangerous cats.  Eventually I got into some real trouble.

“My parents tried to send me to rehab a couple times.  I really blew it.  Every time.  And I ended up in prison for a time.  Eventually they just cut me off.  I was really mad at first, but I’m not anymore.  What I do – it’s not their fault.  I have to battle this demon on my own.”

But then he stopped and shook his head.  “No, see, I have to stop saying that.  That’s the kind of thinking that got me in trouble in the first place.  I can’t do this on my own.  I need help.  And not just human help.  I need God.  I need the power of Jesus in my life.  That’s one thing I learned in here,” he said waving to the walls hung with posters inscribed with Bible verses and inspirational words scripted on pictures of beautiful landscapes.

“You know that story about Adam and Eve in the garden and the forbidden fruit?” he asked the students.  They nodded their heads, hanging on his every word.  “When that serpent came and tempted them, did they ask God about what the serpent was saying?  Did they seek God’s guidance?  No, they thought they could handle the fruit on their own.  Drugs are like that fruit.  Or anything you can get addicted to – alcohol, gambling, pornography, you name it.  You take one bite and your eyes are opened, alright.  You feel awesome at first, but then it leaves you feeling like hell.  And you keep coming back to the tree wanting another first bite. But it turns out that the serpent bites you every time, sucks the life right out of you like a vampire.”

He shook his head and looked down at his hands.  “They never even thought to go to God.  They never turn to him.  So he has to go to them.  And they’re so messed up by the time God finds them, they can’t even stay in the Garden anymore.  That’s what happened to me.  I know I can’t ever go back to the life I had before I started using.”

Then I asked Brian a question.  “So why is City Team different than the other places you’ve been to try to get clean?”

“Well,” he said, “first, I thought it was going to be easy, because, you know, church people and all.  But they are really strict here, very disciplined.  But more than that, what’s different here is that they really ground you in the Word of God and serving the community.  They teach us to read the Bible, and to turn to God when we’re feeling that temptation pulling on us.”

“Brian, can I just challenge you about that a minute?” I asked him.  “Because kids sometimes think that the Bible is just a bunch of words.” I picked up one setting on the table.  “How can reading these words really help with addiction?”

“Yeah, I used to think that, too,” he admitted.  “But, again, you can’t just do it alone.  You have to ask for God’s guidance, and ask other people to help you understand what these words mean.  And what I found is that there is something very powerful in here.  The Bible is like an anchor for me when I feel my head getting whipped around.  Or like a flashlight when I’m in a dark place.

“See, before, when I tried to stop using, I didn’t have anything to fill the hole.  I’d be good for a while, but there was always something missing.  And when things started to get to me, when I got stressed, where did I turn?  Back to the drugs.  But that serpent – he doesn’t care a thing about me.  That demon only wants to drain me dry.  But God loves me and wants to give me life.”

I asked Brian if he had some favorite Bible verses or stories.  He named John 3:16, of course, and Psalm 23.  But then he talked about the passage recounting Jesus’ temptation in the wilderness.

“See, Jesus says right there – you can’t live on bread alone.  You have to have God’s Word.  That’s what really gives life.  And when the devil takes Jesus up to the pinnacle, that’s the way it feels when you’re about to get high.  You think nothing can touch you, and that rush when you fall into it, man . . .

“But see with drugs, it starts out easy and good, but then it gets hard and bad.  With God, it’s just the opposite.  It starts out hard and it’s not easy at all.  You’re in that wilderness for a long time. But when you get on the other side, just like with Jesus, angels are waiting for you.”

Brian then told us how long he had been clean, to the exact day, and how much he looked forward to graduating from the program.  City Team had helped him to get a job, gave him a place to go every night, required him to attend Bible studies, serve the community meal, and sort through the donations that came to the facility.  “This place saved my life,” he said.  “I know it’s not going to be easy.  But I have the power of Jesus. He battled the demons of temptation, and he won.  That’s the power I want in my life.”

The Confirmation students thanked him for talking with them.  For most of them, it was the first time they had met someone who so fiercely battled the temptation of drugs.  Certainly, Brian’s story served as a cautionary tale for them.  But more importantly, I wanted them to hear what a difference faith and God’s Word could make in a person’s life.

Maybe you have stood in the same places as Brian.  At the tree, reaching for that fruit that promises so much, but delivers only the bite of the serpent.  On the pinnacle, tempted to throw yourself into the thrill of danger.  Or maybe you have loved someone who has given in to the temptation of the demon, watched them hurl themselves into that void. And somehow you end up crashing right along with them, or suffering the wounds from that deadly serpent.

This might be a good time for you to enter the wilderness with Jesus, and let him teach you and guide you and strengthen you as you begin a new journey with him.  We’re not surrounded by a gritty urban landscape here.  But there are just as many people struggling with temptation here in the bucolic central Susquehanna Valley as there are in the blighted city of Chester.
And this place, United in Christ Lutheran, this little brick church surrounded by fields and farms, can offer a haven where you can worship God, take part in a prayer session or Bible study to help ground you in the Word of God, and draw you closer to Jesus.

This is a safe place to gather, to share a meal, to serve the community, to surround yourself with people who remind you that you don’t have to be perfect, and you don’t have to do it alone.  That, in fact, you can’t face those demons all by yourself.  You need help.  You need others, and you need the God who loves you and will keep coming to find you, no matter how much you’ve messed up your life. 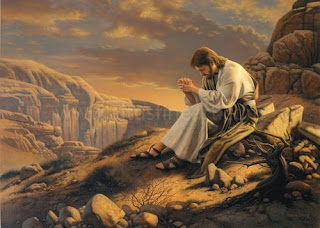 But understand that the journey will start out hard and it won’t be easy at all.  We’ll be in this wilderness for a long time. But when you get on the other side, just like with Jesus, angels are waiting for you. You have the power of the one who battled the demons of temptation, and he won.  That’s the power we want in this life. Amen.