Watch the video of this sermon here:  http://www.youtube.com/watch?v=SNf76TTyi10

Star light, star bright, first star I see tonight . . . I wish I may I wish I might have this wish I wish tonight.

There’s something about stars that have captured the imagination of human beings from the time they gathered around ancient fires, watching the sparks fly up into the darkened sky.

Long before there were Kindles and iPods, televisions and movies, or electric lights of any kind to illuminate our nights, the stars were the only companions to humankind once the sun went down.  And so they would watch those tiny pinpricks of light, looking at them night after night, observing how they would seem to move slowly across the sky.  Soon they were seeing images in the sky, the stars becoming points in connect-the-dots pictures of great warriors, animals, gods and goddesses. After gazing at the night sky in and out of seasons, these early astronomers began to recognize patterns of movement, predicting the location of the stars according to the time of year.  They learned they could guide the direction of their travels by coordinating them with the stars.

They began to give names to the lights that were most prominent, and those names are still with us to this day – the planets we call Mars, Jupiter, Venus, and so on.  They assigned the names of these fixed stars to the constellations known as the Zodiac.

And they saw a connection between the motions of the stars and planets to life here on Earth, a practice known as astrology.  They would try to make sense of the world around them, make predictions about significant human events by watching the signs in the skies.  When they observed something out of the ordinary, it caught their attention.

And so these wise men in Matthew’s story, also known as the Magi, were both astronomers and astrologers.  They were like early versions of scientists making observations, but they also tried to interpret the meaning of what they saw.  And in the year 2 B.C. when they saw the planet Jupiter, one of the brightest stars in the sky, pass very close to the star Regulus, “the King’s star” as it was known, they knew something amazing had happened among humankind.  Today astronomers can use sophisticated instruments and planetariums to reconstruct what the stars looked like in the sky on any given night in history.  And they know that over a period of eight months in that year Jupiter passed by Regulus three times, appearing to draw a crown in the sky.  And then in the ninth month, Jupiter and Venus – the two brightest stars in the sky – passed so near to each other in their planetary travels that they appeared to fuse into a single brilliant star in the sky. 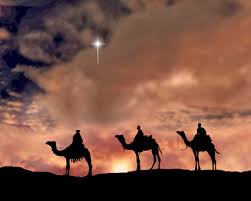 The Magi knew that this occurrence was nearly unheard of, and so they were compelled to follow where that star seemed to lead them.  And that is how they came to be in Bethlehem of Judea inquiring about a newborn king.  They were overjoyed to find the home of the child called Jesus.

His parents, however, were most likely perplexed by the sudden visit of these strange Magi from distant lands.  Star or not, imagine how strange, how disconcerting it must have been for Joseph and Mary to open the door to their home and find these foreigners standing on their door step.  The author Elizabeth Berg in her creative imagining of that scene in her book The Handmaid and the Carpenter describes how Joseph was very suspicious of these strangers, with their odd clothes, their foreign language, and their different looking faces and skin tones.  He wanted to keep these foreigners out of his house, away from his family.  But they insisted on giving his newborn son gifts befitting a king.

Many of us would have reacted similarly to Joseph.  We are taught to be suspicious of strangers.  We are told that foreigners are not to be trusted, that they are out to get us or take what we have.  Reams of newspaper pages and scads of blogs are written about why strangers from other lands should not be welcomed, why they should be kept out, and the harm that they are doing to us.  We build walls and establish policies, construct entire bureaucracies and schedule segments on our talk shows concerning what to do about the foreigner.

And yet in this story in Matthew’s Gospel, the message is simply this:  the foreigners have a gift to give. They offer gold, frankincense and myrhh.  But even more importantly, they share important information about Herod’s intention to destroy Jesus.  With these gifts of knowledge and priceless goods, Joseph is able to escape with his family and keep them safe.  The wise men, of course, also receive a gift – simply seeing the Christ child, the one whom the star pointed to as the King. 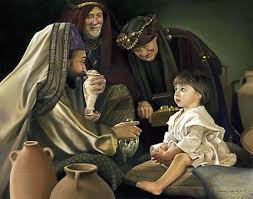 How do you react when you encounter the foreigner, the stranger who looks different from you, practices a different religion from you, has a skin color different than yours, comes from a place far from where you and your family live?  Our first tendency is to pull back, recoil, put a barrier between us and them.  Use derogatory names, tell crude jokes about them, pass laws against them.  We want to protect ourselves from what we are afraid of that we project onto them.

You’ll notice many stories in the Gospel of Matthew about what it means to encounter the stranger, the one outside of your circle.  Keep an eye and an ear out for these stories this year as we read through his Gospel.  Because the people in Matthew’s circle were very worried about the wrong people getting in and messing things up.  They were very concerned about keeping themselves safe, pure and protected from outsiders, foreigners, immigrants, strangers.  So here in this second chapter, he sets the tone for what it means for humankind that this baby King has been born into the world.  Matthew shows us that even the stars in the sky are leading us to practice a radical hospitality, to trust in the God who created the planets and stars circling in their nightly eternal dance, to open ourselves to someone new coming into our circle and bringing us unexpected gifts.

I’ve seen that happen in this congregation.  Ever since Garrett Baker led the series this past summer on “Our Neighbor’s Faith,” people have been curious to learn more about those who practice different religions than ours.
We’ve had a Muslim woman prison chaplain in her hajib telling us about Islam, what we share in common, and what is different.  We’ve had Jewish students and a Jewish professor talk to us about their faith. We had a woman talk to us about Unitarian Universalism.  And in the coming months we’ll be visited from people of the Sikh, Buddhist, and perhaps even Hindu faith. They are different than us, outsiders, foreigners.  And yet the light of Christ shining in this place has drawn them here.  Each of those who have visited with us so far has told me how much they have appreciated their visit – the  questions, discussions, and hospitality from those they met in the forums.  They may not worship the Christ as we do, but they can certainly see the light of Christ through us, opening the way to new understanding, connections, and perhaps even friendship.

And I know some of you have received the gifts of wisdom that our neighbors of other faiths have offered.  One of our members attended the session about Judaism and gratitude and shared with me later how much the presenter’s words had meant to her.  She even wrote them down, and they became like a beacon of light for her, a star guiding her through a difficult road in her life.

From the heavens, from the point of view of those stars, our differences would not be visible, any more than we can notice distinctions between those planets at such a distance.  Our Earth is simply part of another constellation, a green and blue orb swirled in vaporous clouds.  And yet on this planet, God created life and saw fit to enter that life in all its messiness, all its beauty, all its danger, all its wonder.  Who knows, maybe some other being light years away is looking at us, making a wish upon our star.

The light that you radiate as a Christian should be one that shines with peace and hospitality that simply glows.  And as a parishioner shared with me in a quote last evening, “Your life as a Christian should make non-believers question their disbelief in God.”  When people encounter you at church, at the dinner table, in the waiting line, in the office, in the car, on the Internet, anywhere on this planet, whether you are a stranger traveling or a host welcoming: receive the gifts offered to you with graciousness.  And let the light of Christ shine in you so that they may see your good works and glorify your Father who is in Heaven.  Amen.