[Video of the sermon can be found here:]
http://www.youtube.com/watch?v=lnspmqNALdA&list=UUueE_aDXmHikViqmhbAxucg
[Looking around] I don’t see the river today. It doesn’t look as if the river is flowing. What happened?  For the last three weeks, the river has been running through this congregation. It flowed over the pulpit and across the chancel where Baby Moses lay in his basket along the Nile River. It flowed through the aisle like the Sea of Reeds and you all crossed over when the waters were parted. And last week, you stood at the water’s edge, like the Israelites at the Jordan River, ready to cross over into the Promised Land.

But I don’t see the river today. What happened?

What’s happened is that we’ve come through time about 700 years. And we’re a long way from the river. We are in the book of Ezekiel today. Let me tell you what has happened since the Israelites crossed the River Jordan and came into the Promised Land. After conquering the territory and settling there, they established the monarchy with the kings Saul, David and Solomon. It was a glorious time for Israel. They built the Temple as the symbol of God’s throne on earth. When they went from wandering in the wilderness to settling into this new land, they built a house for the Ten Commandments, a glorious temple, which was to be the seat of God among them. And when they did this, the water of God’s blessing was flowing abundantly.

But after the death of Solomon, the kingdom became divided. The people of Israel separated into Northern and Southern kingdoms with different rulers, and a history of rebelling against God’s commands. They had long since forgotten the commitment they made to God back at the River Jordan so long ago. And as the saying goes, a house divided against itself will surely fall. First the Northern Kingdom of Samaria fell to foreign invaders. Then the Southern Kingdom of Jerusalem was attacked by the Babylonians. And in the year 587 BCE, the Temple was destroyed and the people were driven away from their homes and lived in captivity in Babylon.

This was utterly devastating for the Israelites. Remember that the Temple was the center of their universe. Everything revolved around the Temple. All life, all order, all worship, all justice came from the Temple.

But now the Temple is gone. And Ezekiel, a priest and prophet of Israel, is sitting beside his fellow Hebrews in a land that is far from home, enslaved once again by a foreign people. And, quite frankly, they’re depressed. Mostly because they knew they brought this on themselves. They had been warned by the prophets that if they didn’t change their ways and return to laws of God, the consequences would be awful. But they didn’t listen.

No, they were too caught up in protecting the “bottom line”, and they ignored what was really important. If you read through the books of the Minor Prophets - books like Amos, Joel, Habakkuk, Obadiah - you hear the critique of the way people were living - only concerned about getting rich and living the high life, ignoring the needs of the poor, destroying the earth for the sake of temporary profit.

And now they were paying the price. The first thirty-five chapters of Ezekiel recount the judgment against Israel. They worshiped other gods in the Temple, abused the power vested in them, squandered the blessings they had received. Had God abandoned them? No. They had driven God out with their own greed, arrogance, and violence. And now it seemed as if their river had dried up; all that remained were the stagnant waters of hopelessness.

Does any of this sound familiar? Do you see any parallels between the world of Ezekiel and our world today? Actually the resemblance between them is uncanny, especially as it relates to our current ecological crisis.

Like the Israelites in the two kingdoms, we are a house divided against ourselves. There seems to be two kingdoms in the fight over environmental issues. It’s always “us and them”: the polluting industries against communities; the logging companies and the tree-huggers; PETA vs. the chicken industries. Even here in the Upper Susquehanna Valley our own river is threatened by countless forms of pollution, and everyone is taking sides.  We have the shale gas industry on one side and the anti-fracking activists on the other; the tire burner company versus the citizens. Industries and politicians and land owners believe they are fighting for their rights to profit and free enterprise. Environmentalists and conservationists believe they are fighting for the rights of the land and water and air and animals. And neither side is completely free from sin.

Our world is a house divided against itself. And it is falling. Because no matter what side you’re on, there is no disputing the fact that the world is indeed more polluted, the number of illnesses caused by environmental factors is increasing, and the extinction of species is escalating. I would go so far to say that we are living in a state of exile -- exiled from the very planet that was once our Temple. That life-giving, life-sustaining throne of God among us is dying right in front of us. Has God abandoned us? No. We have driven God out with our own greed, arrogance and violence. And our rivers are, literally drying up, befouled by poison, turning into stagnant waters of hopelessness.

And it affects each of us either directly or indirectly on a very personal level.  Like the people of Israel, we are depressed. Have you noticed how many people seemed to be suffering from depression these days?  Just think for a minute – how many people do you know who are taking anti-depressants, yourself included?  I can think of five, just off the top of my head.  This high level of depression is not a coincidence; it is a sign of just how interconnected we all are. More and more people are taking in the suffering of the planet. We are literally bombarded with images and stories and headlines of suffering around the world, and it cannot help but affect us.

“The more highly developed our consciousness becomes, the more . . . that suffering weighs on us, till we risk being crushed by it. . .” (Walter Wink, Engaging the Powers, 304-5) And we are finding that we ourselves are becoming those stagnant waters. Think about a person you know who has suffered from depression. The waters of their spirit just stop flowing. The river is blocked up, its banks clogged with so much pain, so much frustration, so much stuff that needs to be dealt with.

There is a connection between the exiles of Israel and the exiles of the planet and the exiles their own bodies. Their story is our story. And what we need is what the people of Israel needed. We need a vision. We need a reminder that the future is in God’s hands and that all is not lost, that there is hope and that hope does indeed spring eternal. Ezekiel had that vision. Look behind you. [River cloth is dropped from the balcony, and pulled out over the aisle, stretching overhead.]

Ezekiel saw the river. The river flowed out from the Temple, and on either side were trees that never wilted and produced abundant fruit. And the waters were clean and clear and fresh, filled with healthy fish. And people gathered there to draw life from the river, because, as it says in verse 9, “everything will live where the river goes.”

The last thirteen chapters of Ezekiel contain this vision that came to him in the midst of the exile. In the year 573 BCE, after fourteen years of living in the Babylonian Captivity, he saw a vision of the restored Temple in Jerusalem. It is a hope-filled, glorious dream of what life will be like when they return God to the center of their lives, honoring the commandments, living out their faith, respecting the earth that God created.

But in order for the Temple to become the throne of God among them again, they will need to resanctify the land. They needed to, literally, clean up their act. They have to learn to live in harmony with ways of the earth, and with the laws of God, in order to fully experience the restoration and wholeness for which they sought.

And it may not seem like it now, because we are still experiencing the exile.  But I can tell you that the river is, indeed, flowing in our midst. Actually, we should probably have stretched this cloth all the way outside the church and down to the street. Because, like Ezekiel’s vision, the river flows from the sanctuary out into the world. The water represents the cosmic river that flows from the Temple, from the earth, from the throne of God. The river is a vivid symbol of the life-giving powers of God.

And I know that the people of this congregation, and the church itself is part of that vision. Before I ever got here, the congregation made the commitment to do away with Styrofoam and disposable dishes and flatware.  Just imagine how much landfill space has been saved by reusing our dishes and silverware each week. And look at the paper recycling cans, and the recycled items brought here for Hand-up Foundation to pick up.  Again, less trash, more reusing and recycling.  Look at the lighting upgrade and how much that has lowered our carbon footprint by using less electricity.  And think of how many people have signed letters about environmental issues, like saving Rock Run in Loyalsock, and opposing the tire burner proposed for White Deer Township.

This may not seem like much, just a trickle of water.  But remember that the water in Ezekiel’s vision starts out only ankle deep. As it flows out into the world, it gets deeper and deeper. We are only ankle deep in those life-giving waters, my friends. But the water’s going to get deeper and sweeter as we go.

Next week we will come to the conclusion of our series on rivers in the Bible. And we will be in the last book of the Bible, the Book of Revelation. I want you to remember this vision from Ezekiel of the river and trees, because we will see it again. But this time it won’t just be for the Israelites. Next week we’ll see that God’s river is meant for the whole world.

And in meantime, this coming week, I want you to carry this message in your heart and on your lips that we learned today, “God’s river can bring new life.” If you are experiencing depression, one thing you can do is to get yourself to the river, connect with God's Creation around you.  When's the last time you took a walk along the river, put your hand in it, splashed your face with it?  Even if it is just a stream or just the rain falling - one of the best things we can do is to see God's presence infused in all of nature, because that can help to cleanse, nourish and replenish our souls.

When you hear the news of violence and war, when you see evidence of pollution and disappearing wildlife, when your own soul feels like it’s being poisoned or attacked; and when you start to feel the waters drying up around you, when you feel the depression dragging you into those stagnant waters, I want you to see the vision in your mind and keep repeating these words to yourself, to others. “God’s river can bring new life.” Say it like a prayer. Say it like you mean it. And then watch the waters flow. Amen. 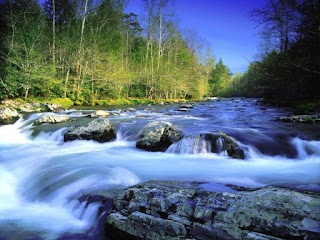