Echoes of the Easter Miracle

Sermon – The Rev. Leah Schade
Easter Sunday, March 31, 2013
The Youtube video of this sermon is available for viewing here:  http://www.youtube.com/watch?v=hUb2QkcwaeM&feature=em-share_video_user

Most of you have already heard the story.  The group of loved ones gathered on that morning to say their goodbyes.  A terrible force of destruction had overcome the man they loved.  They had seen his body ravaged beyond repair.  He had suffered greatly through no fault of his own. And now they just wanted to entrust him to God and release him to death.

But when they arrived to see him, they were told the shocking news – he is alive!  Somehow, by some miracle during the night, a change had happened.  There was no need to say good-bye now.  The group who had gathered couldn’t believe it.  They had to see him with their own eyes.

And when they entered the hospital room – there he was.  The swelling in his face, hands and feet that had made him unrecognizable was now gone.  The pale color and coldness of death that had enveloped his skin was replaced with the healthy blush of warmth and rosy cheeks.  The machines that had surrounded his body just two days before, filtering his blood through constant dialysis, pumping him full of medicines to keep his heart going and fight the infection, were all disconnected.  All that remained was the ventilator for his breathing, and even that was becoming unnecessary as he was beginning to breathe on his own.  We had gathered to say good-bye to Richard Huff.  But – surprise! – saying good-bye was no longer an option. 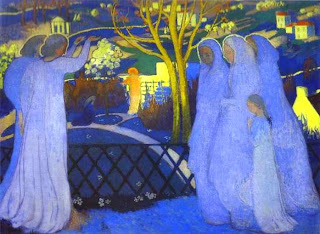 This was the closest I have ever come to understanding how the women at Jesus’ tomb might have felt on that morning over two thousand years ago.  When you have your mind set on one direction, steeled yourself to do the ritual,convinced yourself that you are doing the most loving thing you can do given the tragic circumstances, you even start making plans for going on without the person.  But then you hear the unexpected, impossible news that he is no longer on the brink of death, but has, in fact, made a miraculous recovery overnight.  Well, it’s an emotional rollercoaster to say the least.

For those of you who have never met Richard Huff and have not heard about what happened to him, he is a member of our congregation who suffered from a house fire nearly three weeks ago. He was life-flighted to Lehigh Valley Burn Center in Allentown with severe damage to his lungs, exacerbated by his chronic asthma.  It was thought he would recover in a few weeks, but suddenly his body began to deteriorate to the point that his kidneys had failed, his blood pressure was bottoming out, his liver enzymes were escalating, he was not absorbing nutrition, his lungs were overcome with pneumonia and his body was in sepsis.  It quickly became apparent that the only things keeping him alive were the machines surrounding his body on all sides, beeping and clicking, pushing air in and out of his lungs, filtering his blood.  Richard had a living will clearly stating that he did not want his life prolonged in such a way.

So last Wednesday, four of us gathered around Rich’s bedside – Alice Ann Snyder, Alice’s friend Beverly, Rich’s daughter Becky, and me.  He had been unconscious for nearly two weeks since he had been put on the ventilator.  After listening to the doctors and nurses explain his condition to us, we agonized over what to do.  After much prayer, silence, and open conversation, we decided that we needed to talk to him directly.  So we came alongside him and spoke to him, not even sure if he could even hear us.  But we told him what had happened with the fire and what was happening with his body.  We told him that in two days we were going to gather his family for a prayer service to commend him to God and then honor his wishes to end treatment.  But said to him, “If this is not what you want, you need to find some way to let us know.  And we’re were praying for God’s will to be done.”

Two days later, ten of us came to the Burn Center expecting to do a service of commendation.  Instead, we were told that during the night Richard had dramatically improved.   The nurses who worked day and night to keep Rich going would not consider themselves angels.  But when they shared the news that morning, they might as well have been clad in glorious white robes with mighty wings sprouting from their backs!  Today Richard is no longer on dialysis, all his vital signs are stable, he is breathing on his own more and more, and he is beginning to open his eyes.

The medical explanation is that his adrenal gland had not been producing cortisol which was necessary for the chemical reactions needed for his bodily functions.  As an asthma patient, his body was used to the medicines that he used constantly for his breathing, and was apparently going haywire without it ever since the fire.  So they took a chance and tried “jump-starting” his adrenal gland.  There was no guarantee this would work because so many other bodily functions had failed.  But this started a chain-reaction that caused a dramatic improvement. 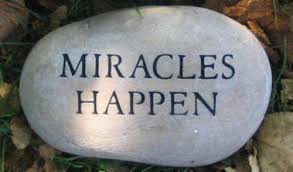 As I wrote in an email to the congregation, “As people of faith, we call this a miracle!  While the outcome of all this is still uncertain, and Rich is not out of the woods yet, the speed of this turnaround has been amazing.  Overnight, he went from being on the brink of death to being on the road to recovery.  There is still a very long road ahead for him, but he has apparently made his wish clear, and God’s will is obviously being done.”

Even to those who might normally be skeptical about these kinds of things, the word “miracle” is the term most often used when talking about Rich.  A miracle is defined as “an extraordinary event manifesting divine intervention in human affairs, an extremely outstanding or unusual event.”  Time and again as I’ve talked about this event with people, they’ve shared with me stories of other miracles that have happened in their lives.  And Rich’s story helps to affirm their faith that God is real and cares and works miracles, even today.
But one person shared something different with me.  She shared with me the story of when her daughter died and there was nothing that could be done to save her.  Even though it happened decades ago, the memory and pain of what had happened was as real as if it were just last week.  And her tears made me pause, in the midst of celebrating Rich’s miracle, and ask – but what about those for whom the miracle did not happen?  What about those who suffer tragedy and experience no surprise of joy?  What does Jesus’ resurrection mean for them?

And then I thought more about this woman.  Despite her grief, she found the strength to get up the next morning, and the morning after that, and every morning since that terrible day when her daughter collapsed in her arms.  She and her husband continued to raise their other two children.  They continued attending church, despite an event that would make most people want to curse God and abandon their faith.  But Sunday after Sunday she is here, serving her church, reading her Bible, hugging little girls who remind her of her own daughter at their age.

And it dawned on me.  There was a miracle after all.  Because she is still here, she kept going, she did not lose her faith, and she believes as strongly in the power of Jesus’ resurrection as Rich Huff does.  What I began to realize is that there are different kinds of miracles.  Some of them come upon us suddenly, unexpectedly, overwhelming us with surprising joy.  And some of them unfold slowly, over days and months, in and out of years, like the petals of a slow-blooming flower opening up over time.  Like a butterfly whose chrysalis is falling away to reveal the miraculous new creation inside.

Christ is risen.  He is risen indeed.  Hallelujah!