The Cancer of the Fossil Fuel Industry

Yesterday I had the pleasure of appearing on WKOK Sunbury/Selinsgrove 1070 AM’s radio talk show “On the Mark” (co-hosted by Mark Lawrence and Than Mitchell) with Dr. Wendy Lynne Lee, Professor of Philosophy at Bloomsburg University.  (The full broadcast, complete with webcam video, is available at http://wkok.info/on-the-mark/. Click on Friday 2/22/13 which will be available until 2/28/13).  One of the callers asked about the way the money from Koch Brothers has influenced the political debate on climate change.  I used the analogy of cancer in the human body to explain the ways in which the fossil fuel industry has infiltrated all aspects of business and politics and debilitated the health of the planet. 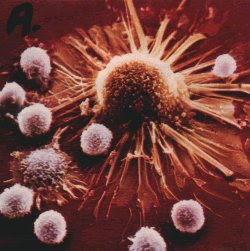 Cancer cells seek only their own self-perpetuation and growth.  They channel the body’s resources into their own self-serving mission of expanding and taking over the surrounding cells, tissues and organs.  The tentacles of the cancerous mass reach out in all directions and, in the end, kill the body.  They don’t care who suffers as long as they are protected, comfortable, and growing at exponential speed.

The greed for cheap, dirty fossil fuels is fed by our country’s excessive and unchecked desire for “growth.”  There are underlying questions we need to raise about our refusal to give the land and people rest (Sabbath), and unrelenting demand we make to have “more” without consideration of the consequences. These questions undergird the moral and ethical issues of extreme fossil fuel extraction and the climate crisis.

Those of us who have been trying to resist and fight back against this cancerous ideology and fossil economy that is threatening the lives of so many and health of the planet are like the “white cells” of the body politic.  But, as Dr. Lee pointed out, hundreds of well-paid operatives are deployed to neutralize the white cells by constantly casting doubt on the science behind climate change and discrediting the reputations of activists.  Even more frightening is the fact that for nearly a decade millions of dollars from anonymous conservative donors have been secretly channeled to groups whose sole mission is to cast doubts about climate change (as reported by Suzanne Goldenberg for The Guardian, http://www.guardian.co.uk/environment/2013/feb/14/funding-climate-change-denial-thinktanks-network.).

This would help to explain why so many people still doubt whether climate change is real.  Social scientist Anthony Leiserowitz, director of the Yale Project on Climate Change Communication, in an interview with Bill Moyers (http://billmoyers.com/segment/anthony-leiserowitz-on-making-people-care-about-climate-change/. ), explained that there are actually six Americas when it comes to climate change:

16% know that climate change is real, caused by humans, and is having a devastating effect on the planet and population.  They are alarmed and want to do something.

29% are concerned and believe it's happening, but see no need to act because it doesn’t seem to be affecting them personally.

25% are cautious, still on the fence, and wonder if climate change is happening because of the so-called “doubt” among scientists (which is simply false – the science is settled.  Climate change is real and human-caused and gravely serious.).

8% are simply ignorant about climate change.

13% have serious doubts that climate change is real, and believe that if it is, it's not human-caused and there’s nothing we can do.

8% are dismissive and claim that climate change is not happening, that it is part of a plot to take away American sovereignty.  While this is a small percentage, it’s well-organized, well-funded, and loud.  And it’s causing 85% of Americans to be stuck in a state of inertia.

So what do we do with this cancer of the fossil fuel industry that is overcoming the body of society and the planet?  Jesus observed to Nicodemus that “people loved darkness rather than light because their deeds were evil. For all who do evil hate the light and do not come to the light, so that their deeds may not be exposed. But those who do what is true come to the light, so that it may be clearly seen that their deeds have been done in God” (John 3:19-21).  Thus we must continue to expose the industry to the light of truth.  More investigative reporting, more speaking truth to power, more sharing of stories about those who are suffering.

Second, surgery is needed.  We must aggressively cut out this cancer that lies to us and says we need this oil and fracked gas to survive (the way the cigarettes lie and tell us we “need” the nicotine to survive). Treatments for cancer in the later stages are difficult, draining, and often debilitating.  But if aggressive steps are not taken, there is no hope for the body to survive.  Yes, cutting out addiction to oil and gas will be difficult, draining and temporarily debilitating.  But the only way to ensure the survival of life on our planet that gets sicker with every well we drill, every gallon of gas we burn, and every compressor station that spews methane into the air, is to take aggressive steps NOW.

Surgically remove the cancerous mass of the fossil fuel industry, use chemo and radiation against all the rogue cells that are lurking around the body looking for another secret place to take hold, and channel all resources into a renewable-energy economy to restore health and vitality to the ecological and economic systems of our planet.

“You shall know the truth, and the truth shall set you free,” said Jesus (John 8:32).  That’s true.  But before it will set us free, it will hurt like hell.  It will be painful.  But hope and health are promised when we undertake this road to healing together.