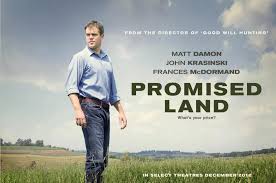 This movie was not what I expected.  From the howls of the natural gas industry slamming the film and attempting to keep it out of theatres, I expected a movie depicting the big bad industry thugs battling the small-town citizens of a rural Pennsylvania hamlet aided by intrepid environmentalists in a fight with a Hollywood-style ending of good triumphing over corporate evil.  But the film is much more nuanced, stunning and chilling than I ever expected.

Interestingly, in the film’s depiction of small-town life, no churches are shown, no clergy appear, no one prays.  The film is virtually free of any religious symbols or connotations – except for the title, which serves as a quiet subtext for the film.  The Promised Land alludes to the land of Canaan, “the land of milk and honey” promised by God to the Israelites in the Old Testament.  The theme of a deity promising land to a people for their settlement and sustenance is woven right through the American myth of Manifest Destiny, which is used by an invading, dominant group to justify overtaking a native population, doing violence to them, displacing them, and exploiting the land’s resources.

Thus some interesting questions were raised for me even before taking my seat in the darkened theatre, and even after the closing scene as I sat in discomfited silence, reeling from what I’d seen.  To whom has this shale-packed land been promised?  Who has the right to promise their land to another, even if the risks to water, air, animal and human life within and beyond your property lines are enormous?  What promises have we made to our forefathers and foremothers who entrusted the land to us?  What promises do we make to our children who may rightfully hope for streams, fields, air and aquifiers that can support their lives well into the future?

And what promises does the industry make?  The film’s land-man (salesman for the industry) offers promises to all who he meets as he tries to get the townspeople to sign leases for their land:  “clean” energy, energy “independence,” community “salvation,” and personal “salvation” through the Dollar Almighty (“You – you could be a millionaire,” one land-owner is told).

It becomes apparent in the film that these promises are little more than lies used as cover for a sinister land-grab that will benefit only the top executives of the multi-billion-dollar "Global" corporation.  The front man for this company is the handsome, patriotic, home-grown, plaid-shirted fella in his grandfather’s worn boots (of course, the shirt was purchased at the local country store just before setting off on his sales-quest).  What makes the “land management” character played by Matt Damon (“Steve Butler”) so compelling is the extent to which he genuinely believes these promises himself.  He fervently believes in the gospel he is proclaiming to the town and its citizens, that natural gas is “safe” and “well-regulated,” that it is the only viable alternative to coal and oil, that having every landowner lease their land to the industry is the only way to save their dying community.  And that what he is offering them is the “ultimate liberator,” what he calls “f* - you” money for people trapped in seemingly endless hard-times.  Like another itinerate preacher who proclaimed release to the captives, Butler announces the good news that salvation has come to them, is in fact right under their feet.  They need only sign on the dotted line and collect their “free money.”

But there is no doubt that just behind the beer-drinking, confidence-inviting demeanor of Damon’s character is the true gasser-mafioso who does not hesitate to use his financial muscles to threaten the town’s supervisor with an offer he can’t refuse – accept the cheap pay-off to sell out his constituents, or lose it all. So while the Little League teams are playing in spiffy new uniforms sporting the company’s logo in a field draped with the company’s signage, Steve Butler and his “it’s only a job” partner-in-crime (the always convincing Frances McDormand) knowingly make empty promises of enormous wealth to impoverished landowners. In all likelihood, however, they will end up with land they can neither live on nor sell after the poisoned water kills the livestock and turns the greenscapes to brownfields.

Yet the film insists that Steve Butler is “not a bad guy.” He is actually “a good man,” who has been disillusioned by his experience of broken promises as a young man growing up in a similar small town whose factory closed up, rendering the community lifeless.  The movie’s treatment of this character is very interesting, especially in contrast to the rogue environmentalist brilliantly played by John Krasinski, a paragon of authenticity and likeability.  The rivalry between the two men is intense because they are playing for high stakes – the heart and soul of the town, and the heart and soul of a local townswoman played by the lovely Rosemarie DeWitt.  As an elementary school teacher, her mission is to teach her students “how to take care of something,” a theme that becomes the pivot point for the movie.

The other important figure for the protagonist is Frank Yates, the local high school science teacher and retired engineer eminently portrayed by Hal Holbrooke, who respected voice raises legitimate concern at the town hall meeting.  “This may not be the saving grace you think it will be,” he says to his neighbors.  “The potential for error is just too high.  You have to admit that fracking is far from a perfect process.  I still have questions.  Let’s put it to a vote.  Because this may not be in the best interest of our town.”  For the next three weeks, neighbors are pitted against each other, since the industry is forcing them to choose sides in an all-or-nothing bid for their land and community.  It’s not a fair fight, concedes the defeated Krasinski at the end, who had only flyers of dead farm animals and burning-farm demonstrations in the face of hundreds of thousands of dollars spent by Global to buy their way into the town.

But it wasn’t until the last few minutes of the movie that I realized why the gas industry is up in arms about this film.  This movie unveils the truth about the tactics of these corporations in a way that shocked even me, an avowed “fractivist” who has seen what these companies are capable of doing.  It serves as a chilling warning for those of us engaged in this work of resisting the corporate fascism of the fracking industry that we must be very careful who we trust.

“Where we are now, where we’re headed – we might be betting more than we think,” is one of the final lines of the film.  And in the end, that’s all fracking is – a big gamble.  And as anyone with a gambling addiction can tell you – the promise, the lure, the temptation of easy money and instant wealth is enough to put your entire life, and the lives of those with whom you are charged to protect, at grave risk.  We are left to wonder at the end of the film if the true promise will be realized – the promise of God’s creation to provide us with what we need if we relinquish our greed, renounce our addictions, and rediscover the true grace that is given to us from a God who does not demand the sacrifice of our land, our earth-kin and our children.  Clean, sustainable energy, communities built on mutual trust, and contentment with the simple gifts of modest living, the beauty of nature, healthy families, and faithful friends – these are the real “promised land.”
Posted by Unknown at 9:35 PM