In honor of the series finale of Mad Men, I'm reposting this piece from 2012: 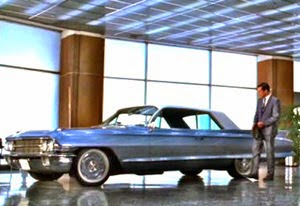 Mad Men episode “The Gold Violin,” Season Two, opens with Madison Avenue advertising creative director Don Draper standing in a sleek Cadillac showroom eyeing the 1962 Coup de Ville appraisingly.  On the verge of entering an elite social and economic level as his firm Sterling Cooper enjoys increasing revenue under Don’s creative influence, the impeccably dressed, eternally handsome man seems made for the expensive status symbol, and it for him.  “This is the car for those who’ve already arrived,” purrs the salesman.  But Don is hesitant at first and leaves the showroom without purchasing the vehicle.  He is not quite sure that he has indeed “arrived.”

The senior partner of Sterling Cooper soon convinces him that he has.  Mr. Bert Cooper informs Don that because their coffee company client was so impressed with his sales pitch for their product, he has now been invited to sit on the board of the Museum of Early American Folk Arts.  “That’s nice,” says Don dryly.  “What is it?”  It’s obvious he does not take this offer seriously.  That’s when Cooper reframes the invitation for him: “Philanthropy is the gateway to power.”  These words are placed in front of Don like an expensive cigar, just waiting for his well-manicured hands to pick up, pass appreciatively beneath his nostrils and light up.  “There are few people who get to decide what will happen in our world,” Cooper says.  “You have been invited to join them.  Pull back the curtain and take your seat.”
The seat is leather, “like the cockpit of a jet,” exclaims his gorgeous, blonde wife Betty (on whom Don has cheated repeatedly since Season One).  He brings the shiny, sky blue road-yacht home to her and says simply, “It was expensive.”  “You deserve it,” she says.  “You work so hard.” 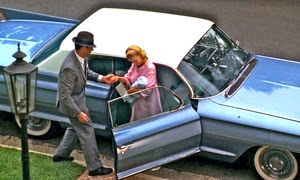 Neither of them give any thought to the fact that the car is a gas-guzzling pollution machine, averaging only 8 m.p.g.  How could they?  In the early 1960’s, environmental consciousness had not yet appeared, much less been mainstreamed. 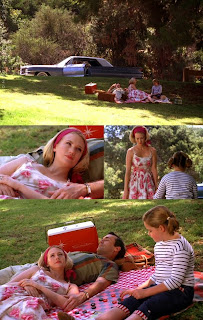 The next time we see Don and Betty, they are draped across a bucolic country hillside, the sedan parked sedately on the lane just above them.  The sun dapples their red-and-white checkered picnic blanket while a tapestry of green trees frames them like a picture postcard.  Laying back against her reclining husband, Betty sighs, “We should do this more often.”  “We should only do this,” Don replies cleverly.  Their young son frolics nearby as his charming older sister, Sally, asks innocently, “Are we rich?”  Her parents exchange a quick glance, and her mother replies, “It’s not polite to talk about money.”

Don then stands up, holding the can he has drained, and chucks it into the distance.  I gasp.  Betty silently checks the children’s hands to make sure they will not soil the new car.  Then she stands up, picks up the edge of the blanket and shakes it out, sending paper plates, napkins, leftover food, and all manner of picnic trash flying everywhere.  My hand goes to my gaping mouth. 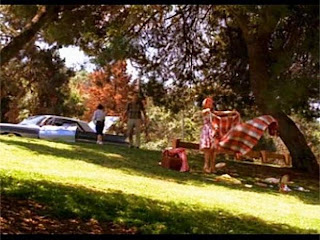 The camera seems to take the point of view of one of the nearby trees, unmoving, unblinking in its gaze, watching as the family gets into the spotless boat-of-a-car and sails off, leaving the formerly beautiful scene spoiled by their garbage.

“I can’t believe they just did that!” I exclaim to my husband.


“But that’s what they did back then,” he reminds me.  “Nobody thought it was wrong to leave your trash behind.  Besides, Don certainly didn't want all that garbage in his shiny new car.”

This is all before the 70’s image of the iconic “crying Indian” surveying a landscape littered with trash, and the cartoon owl reminding children, “Give a hoot, don’t pollute.”  If the fictional Don Draper were alive today, he would be in his late 80’s. In fifty years, he would have seen the advent of Earth Day, the rise of grassroots environmental organizations like Greenpeace and Friends of Earth, and the evolving of society’s conscience about not overtly leaving one’s trash behind, out of sight, out of mind.
But what we see in this fictionalized snapshot of the Draper family picnic is exactly the kind of attitude that still exists among much of our nation, especially among the wealthy.  The Drapers are a lovely, upstanding, and - yes, Sally - rich family who live in a protected bubble of wealth and prestige.  Don makes a living selling illusions to the public on behalf of corporations hawking products that will more often than not end up in a landfill along a bucolic country lane somewhere. 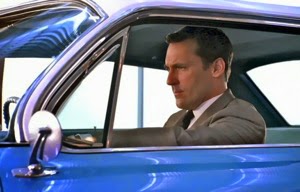 Their expensive car is, despite its shiny chrome and automatic windows, nothing more than a machine that throws its trashy fumes into the air, trapping heat in the earth’s atmosphere that warms the seas and contributes to the horrific mess left behind by superstorms like Hurricane Sandy.  And would Don have risen to replace Bert Cooper, he would no doubt encourage the natural gas corporations of today to throw their philanthropic dollars at the poor rural communities desperate for an infusion of cash in order to secure their power that enables them to trash America’s farms, woodlands and waterways while raking in as much profit as possible.
In the final scene, Don is driving home from a party with his wife Betty swaying greenly in the passenger’s seat.  Is it because she has had too much to drink?  Or because a man at the party they were attending at the Stork Club has just informed her that her husband and his wife were having an affair?  Regardless, the result is the same.  In a bit of poetic justice, Betty vomits all over the seat of her husband’s brand new car.

“You’re garbage, and you know it,” the jilted husband had told Don earlier at the party.  Garbage is as garbage does, apparently.

The excesses of Don’s generation have left our world in a pool of vomitus and garbage.  And the children of Don and Betty are continuing their parents’ drunken addiction to fossil fuels, endless consumerism, and destructive excesses.  The picnic is over.  The trash still remains.