Watch the video of this sermon here:  https://www.youtube.com/watch?v=mX05OC02Wy4&feature=youtu.be 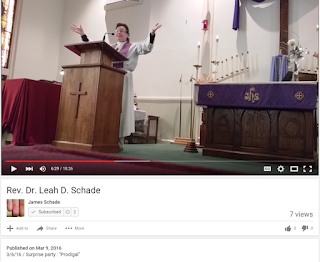 When people are asked, “What is your favorite parable of Jesus?” this story of the Prodigal Son is almost always mentioned.  It is perhaps the most well-known parable, and certainly one of the most beloved.  This story is so powerful because it has the ability to touch all types of people in different ways.  You can probably find yourself in this story.   Who do you relate to the most?  The father dealing with two feuding siblings?  The younger son who has made mistakes and is in desperate need of forgiveness?  The older son who feels he’s done everything right, and now watches this undeserving brother get the party that should have been for him?

And this feast that the father calls for is his way of demonstrating and celebrating that love.  This feast, this extravagant meal, is the father’s way of saying, “Come to the table.  Your sins are forgiven.  Eat, drink, celebrate your fellowship with each other and with me.”

Sounds a lot like communion, doesn’t it?  We’re all invited to this party.  Our First Communion students learned about that this week as they prepared to receive the sacrament.  They learned that we all sin, we all make mistakes.  But because God loves us, we are invited to the table anyway.  We’re given a surprise party that we don’t deserve, but that sweeps us up into the grace of God.
When was a time you were surprised with a gift or a party that you didn’t deserve? 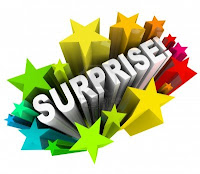 When I think of that question, a story from my own life comes to mind.  It’s about a surprise  party that my family was having for me for my 16th birthday.  I’m the oldest of four, and so I can really relate to the eldest brother in this story.  I always played it straight, walked the line, was the good child in my family.  And my siblings were always getting in trouble.  And it always angered me how much they got away with.  In fact, I would have to say that my siblings and I did not get along well at all growing up.  This was especially true between me and the second oldest child, Ivy Jo.

Ivy Jo was a year younger than me and was born with some physical disabilities.  So she was confined to a wheelchair most of her life.  There was animosity between us probably from the moment my parents brought her home from the hospital.  I'm ashamed to admit, I was jealous of her because of all the attention she got with her disabilities.  And she was jealous of me not only of the abilities I had, but because I got all the positive attention while she got all the negative attention.  And the older we got, the more the bitterness grew between us.  We were, frankly, very mean to each other -- always looking for ways to insult the other, bring the other down.  We brought out the worst in each other’s personalities.

Because we were so close in age, we were only a grade apart in school.  While she had her set of friends and I had mine, our lines of friendship often overlapped at school and at church.  And we brought our animosity towards each other into our friendships.  So  it was, near the time of my birthday, that I noticed Ivy whispering behind my back to my friends.  I’d catch her talking to them, they would laugh, and then she’d scoot away as I came over.  She was trying to turn my friends against me!

I’d ask them, “What did she say about me?”  And my friends would just shrug and say nothing.  I was so angry at them, and furious with her.  Over and over I would come upon her talking to my friends and then buzzing off in her wheelchair, obviously trying to aggravate me.  I confronted several times.  “Why do you keep talking to my friends?  Stay away from them!”

“I can talk to whoever I want,” she'd say.  “It’s a free country.”  And she’d have this smirk on her face that just drove me crazy.

This went on for a couple weeks.  Then one evening, my dad picked me up from a play rehearsal to take me to meet my aunt to celebrate my birthday with a nice quiet dinner.  He made an excuse to stop at a dance club called Zakies, claiming he had to pick up some papers for work.  We went into the club up to the second floor.  I walked through the door and heard, “SURPRISE!”

There were all my friends from school and church all gathered together with my family in that room.  I was shocked to tears.  I couldn’t believe it!  How had they managed to pull this off without my finding out?  My mom told me that, of course they couldn’t send out any written invitations because I might find one by mistake.  So Ivy Jo volunteered to talk to each one of my friends and invite them to my party.

In a rush of emotion, it all became clear to me.  All this time I thought she had been sowing more seeds of hatred, when, in fact, she was giving me the gift of this party that I didn’t even deserve.  I went over to her and gave her a big hug and thanked her for what she had done.  I have a photograph of the two of us embracing, a look of tearful joy and excitement on my sister’s face.

I cherish that photograph.  Because 15 years ago, Ivy Jo ended her life with an overdose of prescription drugs.

I’d like to say that things changed after that moment at the party.  I’d like to say that things were good between us from then on.  But, unfortunately, our relationship continued on a roller coaster of a few ups, and mostly downs.  At the end, we were not speaking to each other, and my sister had isolated herself from our family after we each pulled away.  She suffered not only from her physical disabilities, but from many emotional ones as well.

Perhaps one of the reasons why I find the story of the Prodigal Son to be so poignant is that we do not know how it ends.  The elder son is faced with a decision that, in any case, is going to cost him something.  If he stays outside, he’ll retain his sense of righteousness and pride, the knowledge that he is right.  But that will cost him his relationship with his father and brother.  If he relents and goes into the party with his father, he will hopefully enjoy a reunion with his brother.  But it will cost him his pride and resentment that justify his self-righteous position.

And even if he goes to the party, there’s no guarantee that that moment of embrace between the two siblings will be the happy ending everyone is looking for.  We don’t know whether the younger son will learn from the error of his ways and be a good, obedient son from now on.  Or if he will continue to take advantage of his father’s goodwill and goad his brother with his favored status.  We don’t know if the older brother will forgive his sibling for squandering the family inheritance, or will quietly resent him and act out his bitterness in small ways for the rest of their lives.

This is a father unlike any that Jesus’ hearers would have encountered during their time.  A wealthy man in the time of Jesus would never have acted the way this father did towards his children.  First of all, he would not so easily have given up the portion of his estate to his younger son without question.  It was an insult for the son to ask for it in the first place, because it implied that he regarded his father as dead to him already.  But without a word, he hands it over to the boy.

And then when the son finally does come back, the father is again scandalous in his expression of love.  A rich man would never run out into the street to embrace his pig-smelling, wayward son.  At most he would have whistled for his servant to escort the son home while he waited imperiously on the porch, ready to dole out the proper punishment for the boy’s misdeeds.  But this father makes an utter fool of himself for this child.  He runs with abandon to take the child in his arms, shower his dirty, smelly face with kisses, and dress him with fine clothes and jewels.  He lavishes a feast upon the boy, killing the fatted calf that should have been saved for some religious ceremony.

But no, the father goes out himself, pleading with his son.  No self-respecting rich man would beg his child like this.  And when this hot head sasses his father with such venom, he could have responded, “How dare you talk like that to me, you ungrateful boy.  Now get in there right this instant!”  But, no, he talks with him compassionately.  “Son, you are always with me, and all that is mine is yours.  But we had to celebrate and rejoice, because this brother of yours was dead and has come to life; he was lost and has been found.”

And that’s it.  We don’t know how the son responds.  We do not know the end of the story.  The father has the last word.

And that is what finally gives me some measure of hope when I think of my sister.  We do not know the end of that story yet, either.  Right now, I am standing in a place where there seems to be no hope.  She is gone.  There’s no chance in this lifetime for me to reconcile with her, or her with me.  There is an awful feeling of regret and loss in this place.

Perhaps, you, too, have known that feeling.  Maybe you have experienced conflict with a sibling or a family member that has plagued your household for decades.  And no matter how you try, you keep coming up on dead-ends, painfully running into the same brick walls.

I think, too, about the painful conflicts in the larger human family.  Every time I hear about civil war in some nation, where countrymen and brothers hate each other to the point of murderous rage.  As I watch the deteriorating situation in the Middle East, where the Muslim and Jewish and Christian children of Abraham continue to slaughter one another.  Every time I hear about another terrorist attack, or a murder on the news -- I know that they are not so far removed from me, a pastor, who could not even reconcile with her own sister.

So where is our hope?  Where is the good news for us who, for whatever reason, find ourselves outside the party?

This God who will go to even greater lengths than this,
ultimately sacrificing his own life for us, to break our hearts,
and open our hardened spirits toward each other, reconciling these two sisters,
these feuding families, these warring nations.

Indeed, as Paul says, God in Christ is reconciling the whole world to himself,
not counting their trespasses against them, and entrusting the message of reconciliation to us . . . 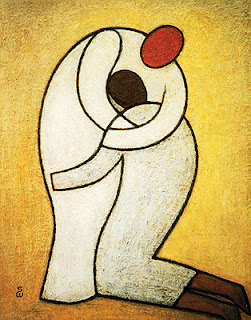