Lutheranism - The Good, The Bad, and the Grace

Sermon for Reformation Sunday
The Rev. Dr. Leah D. Schade, PhD
United in Christ Lutheran Church, Lewisburg, PA
Oct. 26, 2014
Some of us have been Lutheran since the day we were baptized.  Some became Lutheran later in life or have just recently become Lutheran.  But even if you are not Lutheran, every one of us has had our lives shaped by the hand of Martin Luther and his legacy, which we celebrate today.  Let me explain.


Today we commemorate the courageous act of Martin Luther, who, nearly 500 years ago, took a stand against the abusive powers of the church and began what became known as the Reformation.  He wanted to reform the church, to bring it back into alignment with the intentions of God and the principles of the Bible.  In 1517 at the church door of Wittenburg, Germany, a young monk stood nailing his 95 Theses into the splintering wood, an act that would splinter the entire stronghold of the religious authorities and start the Protestant movement that still exists to this day.
Even if you are not a Lutheran, your life has been shaped by the legacy of Martin Luther.
* The notion of civil rights can be traced back to Luther, and it is no small thing that Dr. Martin Luther King Jr. received his namesake from the German monk who stood up against the powers and fought for the value of every human soul.
* Martin Luther also believed that girls should be educated just as much as boys, an idea that eventually contributed to the women's rights movement (though, admittedly, Luther was by no means a "feminist" in the modern sense of the word).
* The wave of immigrants into America seeking freedom from religious persecution in Europe all goes back to the Protestant movement and its aftermath.
* The notion that individuals can and should read the Bible for themselves and encounter the living God through those words goes back to Luther, who was the first to translate the Bible from ancient languages into the common tongue.

And, sadly, World War II can, in part, be traced to Martin Luther.  For while he did many positive things, he also said many negative words about the Jewish people.  Those words eventually helped fuel Nazi ideology in Germany.

Lutherans also persecuted the Anabaptists, or what we know as the Mennonites.  In this area of Pennsylvania we see lots of our Amish and Mennonite neighbors and work alongside them or purchase their goods.  But there was a time when Lutherans so disagreed with their theology and religious notions that we pursued them and killed them.  And so we, as Lutherans, have had to be honest about these darker aspects of our heritage and to apologize and make amends for it.


You probably didn’t know that part about how Lutherans treated Anabaptists or Jews, did you?  But you also may not be aware of the way in which Lutheranism has shaped lives in a positive way, far beyond its German, European roots.  Lutherans in America have a long history of reaching out to immigrants and helping them to get settled in their new country.  Lutheran Immigration and Refugee Services have helped thousands of foreign people lost, alone and without any assistance in this country.  For example, the church I served in Media, PA, once took in a family from one of the former Soviet republics.  They arranged for furniture for their home, stocked their kitchen, helped enroll the children in school, and helped to find the father a job.  All with a family who spoke not a word of English when they arrived.  They weren’t even Christian, let alone Lutheran.  They were Muslim.  But that didn’t matter.  The church responded to the call to help and today the family is thriving in their new home.

I recently read a story called “Drifting Toward Hope,” in Parade, the Sunday insert in the newspaper, about a man named Vinh Chung and his family who were refugees from Vietnam more than 30 years ago.  He tells about escaping Vietnam after the Viet Cong took his family’s rice milling business and forced them to live in poverty.  His parents and seven siblings – ten of them in all - set out on a decrepit fishing boat in 1979 with about 83 others, and they got lost on the South China Sea.  For five days they drifted without food or water and were beginning to contemplate suicide.  Then a World Vision aid ship spotted them and rescued them from certain death.  They were eventually brought to Fort Smith, Arkansas, where a Lutheran church sponsored his family’s move to the United States.

Though they had no possessions and could speak no English, the church helped them to get settled in their new country, their new community, and helped to find employment for his father in a fiberglass factory.  Vinh says that his time was divided between school, work and church.  “Work gave me discipline and kept me out of trouble; church gave me community and a strong faith,” he recalls.  “My siblings and I walked a path two inches wide and 18 years long, but it turned out to be a good one.”  Today he and his siblings hold a total of six doctorates and five master’s degrees from schools such as Harvard, Yale, Georgetown, and other prestigious Universities.

Eventually Vinh had an opportunity to go back to Vietnam to visit relatives who remained.  He was shocked by the poverty.  They live in shacks with barely any furniture and hardly enough resources to eke out a living.


Then, in the article, he quotes a passage from the Gospel of Luke where Jesus says:  “When someone has been given much, much will be required in return; and when someone has been entrusted with much, even more will be required” (12:48 NLT).  He said, “I used to wonder who Jesus meant, because I sure didn’t think it was my family.  The way I saw it, we had been given nothing, entrusted with nothing.  I hoped that rich and powerful people would read Jesus’ words and take them to heart.  But when I went to Vietnam, I finally understood:  He meant me.  I was the one plucked from the South China Sea.  I was the one granted asylum in a nation where education is available to everyone, and prosperity is attainable for anyone.  I worked hard to get where I am today, but the humbling truth is that my hard work was possible because of a blessing I did nothing to deserve.  And that blessing is something I must pass on, in any way I can.”
You can hear Vinh’s Lutheran upbringing in his words.  A blessing you did nothing to deserve?  That’s what Lutherans call grace.  It actually flies in the face of the American truism we all hold so dear – the notion that you pull yourself up by your bootstraps and become a self-made man or woman.  The idea that we are each independent operators functioning solely on our own merit.  That mindset is strongly embedded in each of us and it does have a positive function of encouraging personal responsibility and accountability.  But it is only partially correct and ignores a more fundamental truth. Yes, we work hard.  But we are where we stand today and the good life we enjoy is because of a blessing we did nothing to deserve.  You might not have been plucked from a refugee boat and saved from certain death. But the very family you were born into, the very society that existed before you were born, these rolling and rich soil your family has farmed for generations, the very body and skin you were born into – none of that was due to any work on your part.  You are living off of the hard work and sacrifice of hundreds of people who came before you.  You did nothing to deserve it.


And what is more, the very air you breathe, the clean water you drink, the animals and plants that feed you, the land upon which you home is situated – none of that was created by you.  You did nothing to deserve this Earth that God created.  There is nothing you can do to earn God’s love and care for you.  It simply exists not because of who you are, but because that is who God is.  That is called grace.
Of course, what you do with that blessing is in your hands.  The first and foremost response for me is to feel gratitude.  I am profoundly and humbly grateful to have received these blessings.  And I have to take time every day when I wake up, every time I sit down to a meal, every time I receive a paycheck, every time I walk in God’s creation, and . . . even every time I am ready to rattle off a list of complaints about the life I live.  First I must stop and give thanks that I even have a life to complain about.  Giving thanks puts things into the proper perspective.  Not just during a commercialized holiday next month, but every day, several times a day, I need to slow down and exist in a state of gratitude.


And if you no longer work full time or raise children full time, do not think that your days of accountability are over.  You are still called on to do your best and work diligently at whatever your brain and body will still allow you to do.  Maybe that is serving here at the church, or visiting a sick friend, or making something for someone, or sitting down with your prayer list and lifting those people to God.

No matter what your age or occupation or state of health or geographic location, you are each called to be a servant of God in your circle of life.  That’s what Luther called the priesthood of all believers.  In God’s eyes, no one is more privileged than another to receive the grace God has for us.  There is no hierarchy of merit or salvation.  All are equally covered by the same blanket of grace, and all are equally expected to minister to others under that blanket.


And we are called to pass on that blessing to others.  Today, Vinh serves on World Vision’s Board of Directors, and his book, Where the Wind Leads, has been published.  The blessings bestowed on him, through no merit of his own, he is passing on to others.
What are you doing to pass on that blessing to others?  I see the answer to that question every day that I come to work.  I see the sewing group busy making blankets that will go out to refugees around the world.  I see volunteers at our OAKs monthly senior center welcoming older folks in our area who look forward to learning and laughing and eating together. 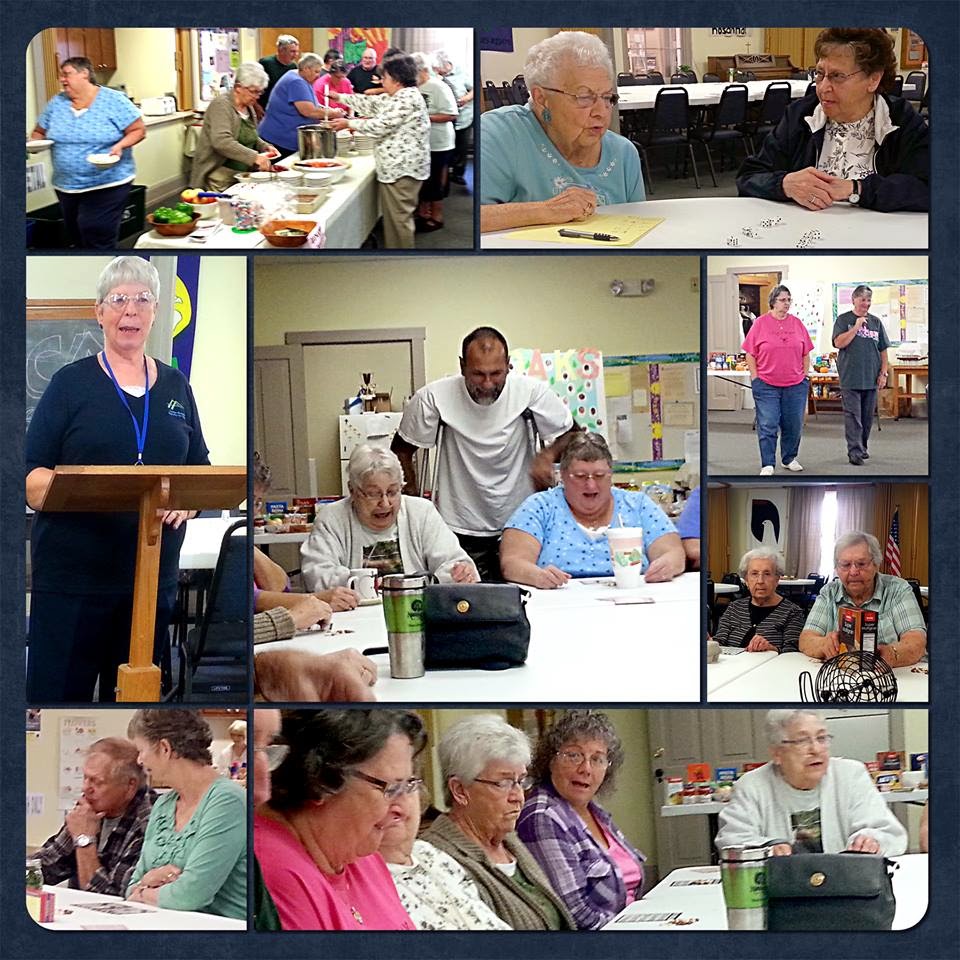 I see youth preparing to serve a spaghetti supper to raise money to go to Detroit next summer to do God’s work with their hands. 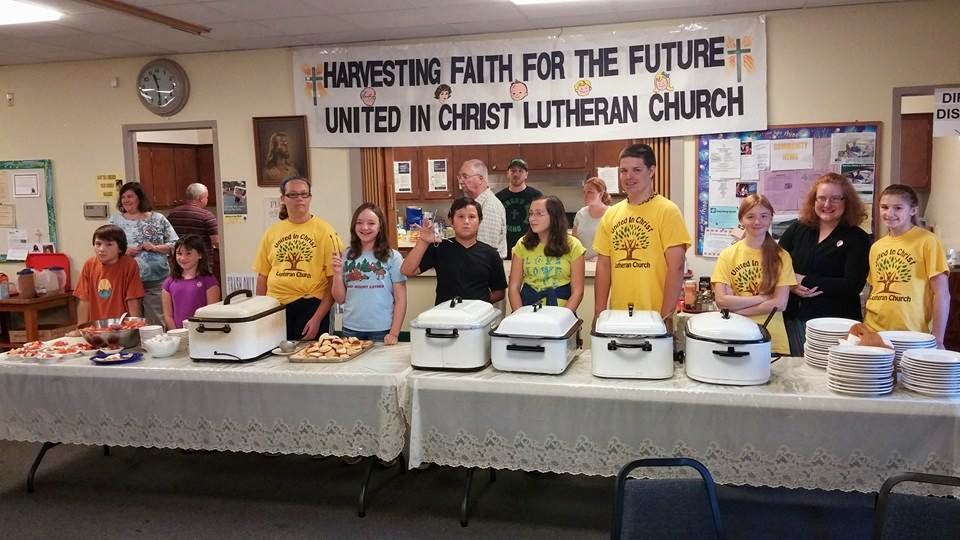 I see a member of the Rich Huff fund going out to purchase clothes for a child in need in our area.  I see donated food in our narthex that will be taken to Hand Up or Mazeppa Manna to feed our hungry neighbors. 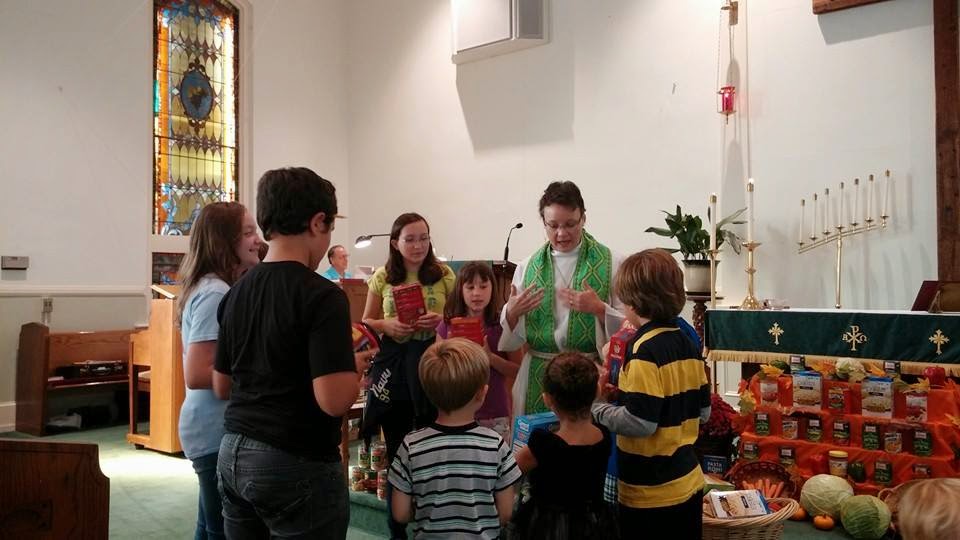 I see people signing up to help serve a meal at St. Andrew’s next month.  The list just goes on and on. 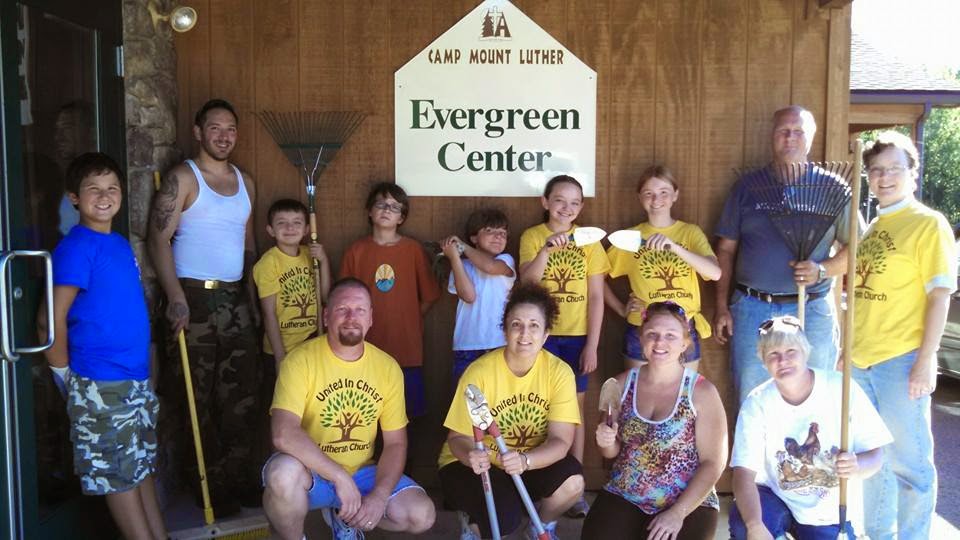 And thanks be to God for the One who touched Luther’s life, and yours and mine – Jesus Christ, showing us what it means to give ourselves fully to God, trusting that grace and mercy for ourselves and the world.  Amen.
Source:  Parade, August 10, 2014

Posted by Unknown at 2:52 PM No comments: