The Challenges of Racism

(This is the column that I published in our church's September 2015 newsletter.  The column is called "Sunlight from Schade.")

As part of our preparations for the ELCA Youth Gathering, we were asked to do a session on racism with our youth and their parents to help us begin thinking about this aspect of what we would encounter when we went to Detroit.  We worked through the materials and began talking about racial and ethnic stereotypes and the way racism is “baked in” to the fabric of our lives on an individual, interpersonal, social and institutional level.  I have to say, those sessions generated some of the most meaningful conversations I’ve ever had in our church.  While on the surface, it may appear that we are a fairly homogeneous congregation, if you dig just a little, you discover that we are more diverse than you might think.  For example, we have several people of mixed races or African descent in our congregation.  We also have some folks who are LGBTQ, or closely related to someone who is.  The group also discussed our diversity in terms of socio-economics, age, and disability.  So when we talk about “confronting racism” and other forms of injustice, we’re talking about very real people—our brothers and sisters in Christ—who have experienced injustice in a very personal way.

Our ELCA Bishop, Elizabeth Eaton, made an intentional effort to address these very concerns in a recent webcast she did with William Horne II, an African American ELCA member in Florida.  In several public statements, Eaton has called for deep conversations about racism and racial justice, particularly in response to several events in the United States, such as police killings of unarmed black men and women, and the June 17 racially-motivated slaughter of black women and men at Emanuel AME Church in Charleston. “God’s intention for all humanity is that we see the intrinsic worth, dignity and value of all people. Racism undermines the promise of community and fractures authentic relationships with one another. We need to talk and we need to listen, but we also need to act,” says Eaton. 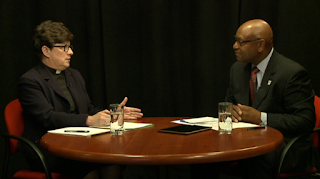 Added Mr. Horne:  “Talking about race and racism is hard work for most of us. Our Christian witness compels us to confront our sinfulness in all forms from within and outside of ourselves. It is more beneficial if we do it together.” You can see the video of their enlightening conversation here:  http://elca.org/webcast.

In response to a statement and call to action from the African Methodist Episcopal Church (AME), Bishop Eaton has asked ELCA churches participate in a day of prayer and commitment to end racism on Sept. 6.  During worship that day, we will offer prayers specifically addressing the need to confront and root out the hold that racism has on our hearts, minds and actions.

But it cannot end here.  Racism is a hundreds-year-old demonic force in our country, and we will not be done the work of casting out this evil until our brothers and sisters of color say we’re done.  White privilege has dictated the terms of this “conversation” for far too long.  As a white, middle-age, middle-class, educated, able-bodied, heterosexual female who strives to answer God’s call to lead a Lutheran congregation, I must do my part to listen to the voices of the oppressed, take seriously their calls for justice, call out racism (and all “isms” for that matter) when I encounter it, and encourage the parishioners I serve to do the same.

I hope you will join me in undertaking this difficult but necessary work of critically examining our prejudices, assumptions, and enculturated beliefs in order to humble ourselves before God and our neighbors of color and repent of our collective and individual sins of racism.  God promises that by doing this work together, we will learn what healing looks like for the Body of Christ.

Posted by Unknown at 3:15 PM No comments: